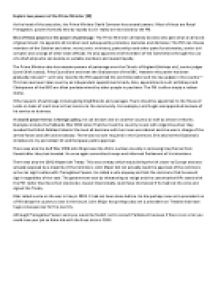 Transfer-Encoding: chunked ﻿Explain two powers of the Prime Minister [10] As the head of the executive, the Prime Minister David Cameron has several powers. Most of these are Royal Prerogative, powers formally held by royalty but in reality are exercised by the PM. One of these powers is the power of patronage. The Prime Minister ultimately decides who gets what at all levels of government. He appoints all ministers and subsequently promotes, demotes and dismisses. The PM can choose members of the Cabinet and other, more junior, ministers; party whips and other party functionaries; senior civil servants and a range of other state officials. He also appoints chief members of the Committees through the use of a chief whip who can decide on suitable members and reward loyalty. ...read more.

Other aspects of patronage include giving knighthoods and peerages. Peers should be appointed to the House of Lords on basis of merit due to their service to the community. For example, Lord Sugar was appointed because of his service to business. A second power he has is foreign policy; he can declare war on another country as well as annex territories. Examples include the Falklands War 1982 when Thatcher took the country to war with Argentina when they invaded the British Falkland Islands. She took all decisions with her inner war cabinet and she was in charge of the armed forces and all funds necessary. There was no vote required in the Commons. ...read more.

He called a vote anyway and told the commons that he would sign it regardless of the vote. The government won by threatening to resign and the conservative MPs voted with the PM rather than face their electorate. Queen theoretically could have intervened if he had lost the vote and signed the Treaty. Blair called a vote on the war in Iraq in 2003. It had not been done before. He has perhaps now set a precedent on a PM taking the country to war in the future. John Major has perhaps also set a precedent on Treaties that have huge consequences for the country. Although Prerogative Powers exist you would be foolish not to consult Parliament because if there is an error you could lose your job as Eden did with the Suez crisis in 1953. ...read more.