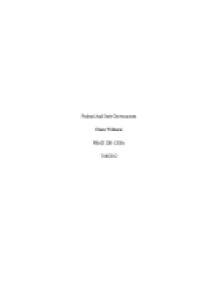 Federal and State Governments of the USA

﻿Federal And State Governments Chase Williams PBAD 200-1203A 7/16/2012 The federal and state governments have a lot of power over us, but we have regulations in place to protect us. The type of government we have is called ?federalism? or shared governement between national and state governments. This is the opposite of(Robert Longley, 2012) ?centralized? governments, such as those in England and France, under which national government maintains total power. Each state has its? own constitution but it has to comply with the U.S. constitution. The powers of the federal government that are exclusive to it are: print money, delcare war, establish an army and a navy, enter into treaties with foreign governments, regulate commerce between states and international trade, establish post offices and issue postage, and make laws necessary to enforce the constitution. ...read more.

Powers of the state government that is exclusively for them are: Establish local governments, issue licenses, regulate intrastate commerce, conduct elections, ratify amendments to the U.S. Constitution, provide for public health and safety, Exercise powers neither delegated to the national government or prohibited from the states by the U.S. Constitution. The state has the power to establish local governments to enforce state law. The state has the sole power to issue licenses such as (Robert Longley, 2012) driver, hunting, marriage, etc. for that state only. It has the power to regualte commerce within the state. The state has the power to allow amendments of the U.S. Constitution. State power establishes hospitals and local police in order to provide for health and safety. ...read more.

No state shall, without the consent of Congress, lay any duty of tonnage, keep troops, or ships of war in time of peace, enter into any agreement or compact with another state, or with a foreign power, or engage in war, unless actually invaded, or in such imminent danger as will not admit of delay. There are similarities between the two governments and they are: Setting up courts,Creating and collecting taxes, Building highways, Borrowing money, Making and enforcing laws, Chartering banks and corporations, Spending money for the betterment of the general welfare, and Taking (condemning) private property with just compensation. There are a lot of powers they have together and exclusive powers, but theyare set up to create a more perfect union, and to promote the general welfare for the people. These powers have been working sense they were created, and so there should not be changed. ...read more.