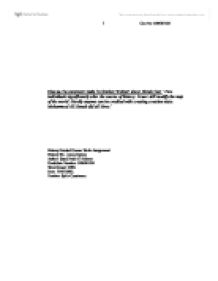 'Few individuals significantly alter the course of history. Fewer still modify the map of the world. Hardly anyone can be credited with creating a nation state. Mohammad Ali Jinnah did all three.' - Discuss this statement by Stanley Wolpert

Discuss the statement made by Stanley Wolpert about Jinnah that:' Few individuals significantly alter the course of history. Fewer still modify the map of the world. Hardly anyone can be credited with creating a nation state. Mohammad Ali Jinnah did all three.' History Guided Course Work Assignment History HL- Asian Option Author: Syed Nadir El-Edroos Candidate Number: D0638-024 Word Count: 2993. Date: 13/01/2002. Teacher: Sylla Cousineau Table of contents- page An Introduction to Jinnah: 3 Jinnah: The Ambassador of Hindu-Muslim unity: 3-4 Jinnah the constitutionalist: 4 Satyagraha and the Khilafat Movement: 5 The Delhi Conference of 1927: 5-6 Jinnah, And the Muslim League: 6-7 Congress Provincial Rule: 1937-39: 7 The Demand for Pakistan: 8-9 Conclusion: 9 Bibliography: 10 Evaluation of Sources: 11-12 An introduction to Jinnah: To Pakistanis, Muhammad Ali Jinnah is revered, known as Quaid-e-Azam, or 'Great leader'. He is their George Washington, their de Gaulle, their Winston Churchill. Born on December 25, 1876 in Karachi and getting his early education in his birth place, Jinnah joined the Lincolns Inn in 1893 to become the youngest Indian to be called to the Bar three years later. Jinnah rose to prominence as Bombay's1most successful lawyers. According to one contemporary, quoted in a Time Magazine profile, Jinnah was "the best showman of them all. Quick, exceedingly clever, sarcastic and colorful. His greatest delight was to confront the opposing lawyer by confidential asides and to outwit the presiding judge in repartee."2 In 1906 Jinnah joined the all India Congress, the first Indian political party that strived for political power for the Indians in government, and while still serving in the Congress, in 1913 joined the Muslim League, prompting a leading Congress member to call him the ambassador of "Hindu-Muslim unity". From this point on, Jinnah played an active part in the Indian home rule movement. Thus, his participation in politics may be said to have began begin from this point. ...read more.

Controversy and discontent arose when in order to bridge the differences of the constitutional plan, these proposals waived the Muslim right of a separate electorate, a Muslim demand since 1906. At the conference Jinnah argued that; "What we want is that Hindus and Muslims should march together until our objective is achieved.... These two communities have got to be reconciled and united and made to feel that their interests are common"24. The conference however refused these demands of a separate Muslim electorate. This represented the most 'devastating'25 setback in Jinnahs desire for communal unity and as he admitted to a Parsee friend at the time it was the 'last straw' and 'the parting of ways for him'.26 Jinnah had thus gone from being a staunch advocate of Hindu-Muslim unity to feeling disillusioned by the course of the events in Indian politics in 1929. The injection of Hindu ideals into the nomenclature of the Congress party led to a Hindu-Muslim divide.27 Jinnah, And The Muslim League. It was during Jinnah's absence from India that the poet philosopher Allama Muhammad Iqbal, presented the two-nation theory in the congressional meeting of the All India Muslim league in Aligarh in 1935.It was for the first time that the idea of a separate muslim nation was presented, India he said, "was not one but two nations, Hindu's and Muslims."28Iqbal was instrumental in convincing Jinnah to return to India to head the cause for the rights of the Muslims of India. Jinnah noted about Iqbal that, "my political career required direction, Iqbal presented me with one."29 On his return from Britain in 1936, the first order of business was to prepare for the 1936/37 elections based on the Government of India Act 1935, which granted greater autonomy to the Indian provinces. Thus the goal of home-rule had reached the provincial level. To be considered a force to be reckoned with, Jinnah and the Muslim League first had to show that they were the sole representatives of the Muslims of India. ...read more.

elections where, the Muslim league won over 85% of the vote in the Muslim electorate and cemented itself as the sole representative of the Muslims of India. The 1946 elections took place under the Cripps Plan of 1944, which conceded the right of home-rule on a provincial level and greater influence in the federal government. As a result of the elections Jinnah successfully argued to the newly appointed viceroy to India that, the Muslim League's success was nothing more than a referendum for Pakistan.53 Conclusion: Through this essay I have shown that Jinnah early on from his political career was an influential member of Indian politics. He was a staunch Indian nationalist and supporter of Hindu-Muslim Unity. Though dismayed by the situation of Indian Politics he returned to lead the Muslim League and was instrumental in his success. His character and his effect on the masses can be judged by the event described at Minto Park in the previous heading. Jinnah also had another advantage over conventional Muslim Leaders that he was not related to a strong or controversial religious sect. He did not associate himself with any particular geographical location, and was not tied to any particular linguistic group. This helped ordinary Muslims to associate with his image. The link that Jinnah established with the masses and the trust that they placed in him and that fact that he was the only Muslim leader to gain such a wide spectrum of respectability shows that without him the creation of Pakistan would have been impossible. Thus proving Stanley Wolpert's statement true. The following statement that acts as a summation of this essay and its aims can highlight this: "Mohammad Ali Jinnah's visit to the St Josephs convent in 1941 changed all our (students) ideas about the Muslim League and the rights of Muslims. We had previously not even considered the Muslim League seriously. His visit and subsequent speech changed that and by the end of the day we had joined the struggle for Pakistan. ...read more.