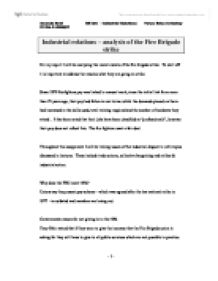 For my report I will be analysing the recent events of the fire brigade strike. To start off it is important to address the reasons what they are going on strike.

Industrial relations - analysis of the Fire Brigade strike For my report I will be analysing the recent events of the fire brigade strike. To start off it is important to address the reasons what they are going on strike. Since 1978 firefighters pay was linked to manual work, since the initial link from more than 25 years ago, their pay had fallen in real terms whilst the demands placed on them had increased in the skills used, total training required and the number of incidents they attend . It has been noted that their jobs have been classified as "professionals", however their pay does not reflect this. The fire fighters want a fair deal. Throughout this assignment I will be linking issues of the industrial dispute to with topics discussed in lectures. These include trade unions, collective bargaining and strikes & industrial action. Why does the FBU want 40%? Unions say the present pay scheme - which was agreed after the last national strike in 1977 - is outdated and members are losing out. Governments reason for not giving in to the 40% Tony Blair stated that if they were to give the increase that the Fire Brigade union is asking for they will have to give to all public services which are not possible in practice. Trade unions There are many different organizations that are able to represent the employers and the employees, for the fire brigade their union is the fire Brigade Union (FBU). The features of the union are it is registered, they are highly interested in collective bargaining and the protection of its members interests are its main function. ...read more.

* Offer 3 - on 22nd November on offer of 16% pay increase was put forward by the deputy prime minister John Prescott. The ACAS (conciliation) services were called on to solve the problem. The negotiation process so far to date has shown there is no official agreement. There is no value unless both parties accept what is on offer and make it work. Andy Ransford reported back the latest offer of 16% to the union to try to persuade them to accept it. The dispute is far from reaching an agreement from both sides, either side does not want to back down and lose face. Because of this long process it has caused many problems. 1. the strikes are still ongoing causing the replacement of green goddesses that are not close to the equipment of fire engines 2. It has caused demotivation of the fire fighters, they feel their demands are not being taken seriously. The union decided to call of their strike after agreeing to talk to the conciliation of ACAS. Thos is good for the union as it is offering them some kind of hope. It allows the local authority employers and the union to negotiate amongst themselves without the influence of the government. The talks were mainly about and their ideas of modernization. Has the ACAS helped the situation? The fact that the strikes have been suspended to allow the talks to proceed is a sign that compromise is in the air. Which looks promising for both sides? ...read more.

In order for the fire fighters to perform that job duties there need to be 100% commitment from the employees. At the moment this is not present, they feel unimportant because they are not getting their way. This in turn results in demontivation which is the key aspect of their job. Demotivation can cause lack of effort and lack of commitment. Abraham Maslow in 1954 came up with a theory regarding our needs called the "hierarchy of needs". He discovered that here are 5 essential human needs. He argued that at the bottom were the five basic needs which is survival. The fire fighters were not receiving this. Many needed to gat second jobs in order for then to survive. It is important that each level is completely satisfied. Since the fire fighters could not complete the firs they are unable to travel up the scale therefore not being able to cater for all their needs. Recommendation The recommendation to resolve this dispute is to continue with talks through the ACAS as this achieved the best results (conciliation of the proposed 8 day strike). Instead of the government trying to destroy their public support, they should try to invite the FBU to a meeting where the entire situation can be argued, discussed, debated and solved.. Conclusion To conclude my report I can say that the negotiations and consultation methods are not fully working. The Bain report has added much to this problem. The government strongly agree with it however it is strongly opposed by the union.. To much time was spent on the government part discussing what they will not do instead of what they will do. ...read more.