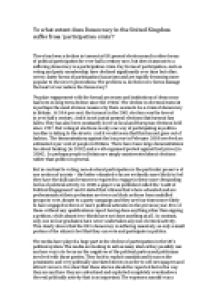 From what extent does the UK suffer from a participation crisis?

﻿To what extent does Democracy in the United Kingdom suffer from ?participation crisis?? There has been a decline in turnout at UK general elections and in other forms of political participation for over half a century now, but does it amount to a suffering democracy in a participation crisis. Key forms of participation, such as voting and party membership have declined significantly over time but other, newer, faster forms of participation has arisen and are rapidly becoming more popular to the newer generations. The problem is, do these new forms damage the heart of our nation, the Democracy? ?Popular engagement with the formal processes and institutions of democracy has been in long-term decline since the 1960s?. The decline in electoral turnout is perhaps the most obvious reason why there seems to be a crisis of democracy in Britain. At 59.4 per cent, the turnout in the 2001 election was the lowest in over half a century. And it is not just at general elections that turnout has fallen. ...read more.

The media have played a huge part in the decline of participation in the UK?s political system. The media are looking to sell as many stories they possibly can and one way is to focus on the negatives of the political parties and politicians involved with those parties. They look to exploit scandals and focus on the pessimistic and very politically unrelated stories in order to sell newspapers and attract viewers. It is clear that these stories should be reported but in the way they are and how they are advertised and exploited completely overshadows the real politically activity that is so important. The expenses scandal was a clear showing with a select group of MPs that had made some fiddled with their expenses and was exposed by the Telegraph. I agree that was the correct thing to do but what came next has created a legacy that years on is still lingering. The media continued the stories for weeks and months just clinging to stories and shaming the whole political system. ...read more.

Also it may be argued that people demonstrate when they find the normal method weak or infective. The democracy must be seen as weak when people have to take to the streets to show their distaste at political ideology. This highlights that though orthodox methods of participation may be declining, people, in this democracy can still go out and express their views and have the ?freedom of speech?. In conclusion, Political participation is important, not simply because it is the beating heart of a healthy democracy, but because it is directly related to the effectiveness of government. Low levels of participation seem to be associated with ineffective governments. Though some forms of participation in Britain are increasing, others are declining. The problem, however, is that the forms which are declining, like electoral voting and party activism, are central to democracy and the effectiveness of government. The forms that are increasing, such as consumer participation, are not central, although important and therefore do not improve the situation. In this sense, there is a crisis of democracy and participation in Britain today. ...read more.