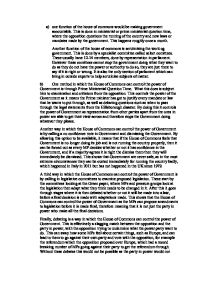 Functions of the House of Commons and how it makes Government accountable.

a) one function of the house of commons would be making government accountable. This is done in ministerial or prime ministerial question time, where the opposition questions the running of the country and new laws or mandates made by the government. This happens roughly once a month. Another function of the house of commons is scrutinizing the work og government. This is done by a specialist committee called select comittees. These usually have 12-14 members, done by representation in parliament. However these comittees cannot stop the government doing what they want to do as they do not have the power or authority to do so, they are just there to say if it is right or wrong. It is also the only section of parlament which can bring in outside experts to help scrutinize subjects of matter. b) One method in which the House of Commons can control the power of Government is through Prime Ministerial Question Time. What this does is subject him to examination and critisicm from the opposition. This controls the power of the Government as it means the Prime minister has got to justify every mandate or law that he wants ...read more.

legislation before it is made final, therefore meaning that it is not just the party in power who make all the final decisions. Finally, debating is a way in which the House of Commons can control the power of Government. This is effectively a slagging match between the opposition and the party in power, with the opposition trying to undermine what the power party want to do. This can sway how some MPs feel about certain things, such as Europe, and can lead to them to go against their own party and vote with the opposition, for example the referendum which the opposition proposed over Europe, which had a record breaking number of MPs going against their party to get the referendum through. Without these debates this would not be possible as the party in power would not want to do these things, therefore showing how the House of Commons can control the power of Government. c) One way in which the House of commons is effective in carrying out its functions is the regular basis with which the Ministers are held to account. ...read more.

The legislative committees, which scrutinize these laws, are also relatively weak. This is due to the fact they are subject to whipping, by their parties, which means they cannot bring in their own political views to the laws as the whips of their party control their thinking ways and make them stick along the lines of their party manifesto. Therefore even if a conservative MP wanted to pass a law on Europe, as they have the majority in the committee, the whips would prevent them from doing this as it is against the political views of the Conservatives. Finally, the House of Commons is still socially and politically unrepresentative. It is still mainly white men, with ethnic minorities such as blacks and Asians being very rare In the commons. This means that the views of these people aren't being seen in the commons, meaning that it is not fully democratic as it is not the views of the people, it's the views of a minority. As a result of this these people are unlikely to vote, which means a decrease in the participation figures in the general elections. ...read more.

3 Stars - This piece of writing is thorough and demonstrates strong subject knowledge. A lot of it is quite descriptive and narrates the functions of different parts of parliament without always analysing how effective they are in practice. The structure is unusual, meaning that there is a lack of a conventional introduction and conclusion.