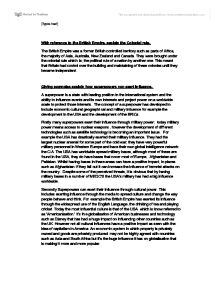 With reference to the British Empire, explain the Colonial rule. The British Empire was a former British controlled territory such as parts of Africa, the majority of Asia, Australia, New Zealand and Canada. They were brought under the colonial rule which is; the political rule of a nation by another one. This meant that Britain had control over the building and maintaining of these colonies until they became independent. Giving examples explain how superpowers can exert influence. A superpower is a state with leading position in the international system and the ability to influence events and its own interests and project power on a worldwide scale to protect those interests. The concept of a superpower has developed to include economic cultural geographical and military influence for example the development in the USA and the development of the BRICs. ...read more.

Secondly Superpowers can exert their influence through cultural power. This includes exerting influence through the media to spread culture and change the way people behave and think. For example the British Empire has exerted its influence through the widespread use of the English Language, the drinking of tea and playing cricket. Today the most influential culture is that of the USA which is know referred to as 'Americanisation.' It's the globalisation of American businesses and technology such as Disney that has had a huge impact on influencing other countries such as the UK. However not all cultural influences have a positive impact as seen with the idea of capitalism in America. An economic system in which property is privately owned and goods are privately produced may not be highly agreed with countries such as Asia and South Africa but it's the huge influence it has on globalisation that is making it more and more popular. ...read more.

The Soviet Union was the second largest economy due to the massive energy resources they had, resulting in them bringing in a lot of money. Similarly, the USA came to be the world's most economically powered country due to extensive amount of energy resources they had; but not without the help of the large resources of metals and timber that allowed them to make large quantities of money. The bigger the income the more significant influence there is over global economies, which is how the US dollar ($), the Euro (�) and the Pound (�) came to be the 3 global power currency's. There are many ways a superpower can exert their influence. Although it may be argued that a country is not a superpower until it possesses all four influences, it is clear that each way can individually exert a massive influence worldwide. ?? ?? ?? ?? [Type text] ...read more.