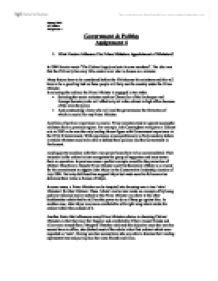 Government & Politics Assignment 4 1. What Factors Influence The Prime Ministers Appointment of Ministers? In 1994 Brazier wrote "The Cabinet largely selects its own members". The idea was that the PM really has very little control over who is chosen as a minister. Many factors have to be considered before the PM chooses his ministers and this will have to be a gruelling task as these people will help run the country under the Prime Minister. In selecting the cabinet, the Prime Minister is engaged in two tasks: * Selecting the senior ministers such as Chancellor of the Exchequer and Foreign Secretary who will effectively sit in the cabinet in high office because of the roles they play. * And constructing a team who will lead the government, the formation of which is crucial for any Prime Minister. Any form of political experience is crucial. Prime ministers tend to appoint successful ministers from a previous regime. For example Jack Cunningham was given a Cabinet role in 1997 as he was the only leading labour figure with Government experience in the 1974-9 Government. With experience comes proficiency in Parliamentary debate in which Ministers need to be able to defend their policies and the Government in Parliament. Leading party members with their own power bases have to be accommodated. ...read more.

The Prime Minister receives his Ministerial authority from four sources, which can be identified as the Crown, The Party, Parliament and finally The People. In terms of the Crown, the Prime Minister is technically appointed by the monarch and so therefore carries his or her authority. After a general election, the leader of the winning party is summoned to Buckingham Palace and is asked to form a government. 'The Party' gives authority because of the electoral system used here in the UK, the Prime Minister is almost always likely to be the leader of the majority party in the House of Commons and so is more than likely to win any votes that pass through parliament in their favour. Parliament giving authority realistically means the majority party in Parliament giving authority. It is expected that opposition parties will not support the government but it is irrelevant what they choose as they are the minority. If a party member were to reject its own government then it is expected he or she will not survive long in the job. For Labour, the party leader is elected by all party members. Their choice might not have the support of Labour MP's, who only represent one third of the votes for the labour leadership, so technically a future Labour leader could be elected by the party but rejected by Parliament. ...read more.

The position of the PM is placed under scrutiny in these situations and will either take the full praise or criticism for the speeches and debates. The last Power the PM holds is as the Leader of the parliamentary party. The PM must lead the party's MP's in the House of Commons. The MP's look to the PM for direction and unity and in turn the PM expects party loyalty. Many MP's rely on the PM for their position as members of the governing party and those with marginal seats depend on the PM for their very own places in the Commons itself. Over time, the power's the Prime Minister holds is growing with every election. Prime Ministers these days are technically able to pass any laws and votes as they wish because of their position as leader of the Majority party in the Commons, if all party members vote as the PM wishes, then they will win every vote, and many MP's do so in fear of losing their jobs.. They can implement policies without consulting parliament and go to war without seeking any votes or discussion in Parliament. The President of the United States in the other hand has to consult and get the full backing of Congress with any decisions and policies. ?? ?? ?? ?? Mustaq Miah AS Politics Assignment 4 ...read more.