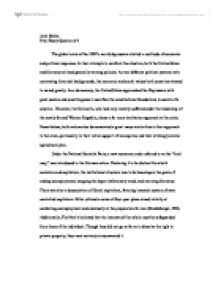 Amit Mehta Final Essay Question # 1 The global crisis of the 1930's world depression elicited a multitude of economic and political responses. In their attempts to confront the situation, both the Unites States and Germany utilized generally varying policies. As two different political systems with contrasting historical backgrounds, the economic and social values both countries attested to varied greatly. As a democracy, the United States approached the Depression with great caution and unwillingness to sacrifice the constitutional foundations in search of a solution. However, the German's, who had only recently suffered under the leadership of the newly formed Weimar Republic, chose a far more totalitarian approach to the crisis. Nevertheless, both nations also demonstrated a great many similarities in their approach to the crisis, particularly in their initial support of monopolies and their strikingly similar agricultural plan. Under the National Socialist Party, a new economic order referred to as the "third way," was introduced to the German nation. Declaring it to be distinct from both socialism and capitalism, the institutional structure was to be based upon the goals of ending unemployment, stopping the hyper-inflationary trend, and rearming Germany. There was also a denunciation of liberal capitalism, favoring instead a system of state controlled capitalism. Hitler utilized a series of four-year plans aimed initially at combating unemployment and eventually at the preparation for war (Kindleberger, 238). Additionally, The n**i's believed that the interests of the whole must be safeguarded from those of the individual. Though they did not go as far as to dissolve the right to private property, they most certainly circumvented it. When compared to the New Deal policies of the US, the n**i response to the Depression contrasts sharply in its goals and actions. The n**i's strove to implement a fascist government and thereby effectively destroy democracy. Furthermore, their policies incorporated the exploitation and eventual annihilation of certain ethnic groups, particularly the Jews. Finally, the overall goal of the n**i economic system was the preparation and mobilization for of war. ...read more.

Similar examples of direct action were implemented by the New Deal throughout American cities such as Flint, Michigan. The Depression had uncovered the local and regional government's inability to cope with an economic crisis on such a grand scale. Thus, it was the New Deal which effectively forged a new structural system to deal with the Depression and in the process cultivated the development of substantial changes in both the local administration and the public's outlook concerning relief (Sternsher, 77). Instead of catering to the elites and politicians, the federal government required that each local committee be directed by a trained social worker. Such policies alienated many local officials, as in the case of Flint, whose welfare administrator, Louis J. Ludington, after regaining power in 1938 attempted to undue all that was accomplished under the New Deal. Nevertheless, Ludington's reaction did not represent a community-wide rejection of relief and instead was more of a political response (Sternsher, 81). In truth, the New Deal greatly benefited Flint and similar communities throughout the country. Furthermore, its policies helped change the popular view concerning welfare. As more residents received public assistance, relief no longer was associated with only the pariahs of the community (Sternsher, 80). Instead, people throughout the country increasingly came to view relief as "a right of citizenship, not a symbol of shame" (Sternsher, 81). While the period before 1937 was more concerned with the direct confrontation of social problems resulting from the Depression, the post- 1937 era saw a change in the New Deal and general liberal focus. Furthermore, there was shift from the early New Deal's "social-response." Policy issues were now discussed and modeled by a smaller, more exclusive political sphere. Though issues were confined to the state, they were also not confronted by those outside the smaller group of elites; predominantly liberal policymakers, journalists, and intellectuals. This network of elites was by no means confined to a "cultural or social vacuum." ...read more.

The fallout from the economic crisis proved severe. The general public, who had been left out of the political process found themselves suffering the most from the rampant inflation. Subsequently, they increasingly held little trust in the government and began drifting more towards the political right. In addition, the financial crisis contributed to a general belief in fiscal conservatism. Unfortunately, such an economic standpoint only served to hinder dealing future dealings with the Depression. The 1929 Wall Street crash landed the final blow on the German economic system, taking away the "life preserver of US currency." Due to Germany's reliance upon exports and its low domestic consumer spending, the Depression proved exceptionally debilitating to the German economic system. By 1932, the unemployment rate had reached a high of 33%, already surpassing the US 1933 unemployment rate of 25%. Furthermore, the ad hoc emergency response by the presidential regime proved ineffective. The result of such unproductive leadership was a rising lack of support for the Weimar republic and the rise of Adolph Hitler to the position of Chancellor in 1933. Mnay of the policies, such as the NRA, were perceived to be socialist actions which were undrming the foundation of Amereican capitalism. Thugh these actions may have been criticzed for their socilast inclination, they were evtually handeled by the Suprme e curt andd eclarede uncontituional. This is what made the New Deal a truly democratic response. The country need a leader willing to take risks and stretch govenremnt power, yet the American politcl system's checks and balances kept FDR within certain limits. Through the legislative bodies and Supreme Cout, FDR was kept in line. Furthermore, unlike Germnay which brutally repressed dissent, the New Deal never trely rpressed any patucvlar group or ethiicty. The media and public were allowed to voice their concerns and diaagremements. It was this steght of the public which further chcarterizes the New Deal as truly democratic response. The President and Cngress were publciky elected officlas, thus the descions they made together were the will of the majority and thus in essence democratic. ...read more.