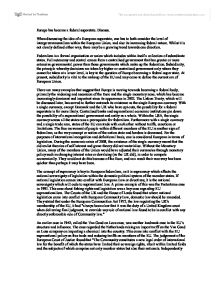 Has Europe become a federal superstate?

Europe has become a federal superstate. Discuss. When discussing the idea of a European superstate, one has to both consider the level of intergovernmentalism within the European Union, and also its increasing federal nature. Whilst it is not clearly defined either way, there may be a growing trend towards one direction. Federalism is a formal organisation or union which includes within itself a collection of subordinate states. Full autonomy and control comes from a centralised government that has greater or more extensive governmental power than those governments which make up the federation. Subsidiarity, the principle whereby decisions are taken by higher or centralised government only where they cannot be taken at a lower level, is key to the question of Europe becoming a federal super state. At present, subsidiarity is vital to the makeup of the EU and may come to define the current era of European Union. There are many examples that suggest that Europe is moving towards becoming a federal body, primarily the widening and ascension of the Euro and the single monetary zone, which has become increasingly dominant and important since its appearance in 2002. ...read more.

The judgement of the European Court of Justice found that "The Community constitutes a new legal order of international law for the benefit of which the states have limited their sovereign rights, albeit within limited fields and the subjects of which comprise not only member states but also their nationals. Independently of the legislation of member states, community law therefore not only imposes obligations on individuals but is also intended to confer upon them rights which become part of their legal heritage. These rights arise not only where they are expressly granted by the treaty, but also by reason of obligations which the treaty imposes in a clearly defined way upon individuals as well as upon the member states and upon the institutions of the community." This demonstrates EU Supremacy when in conflict with national law. Finally the existence and ratification of the Lisbon Treaty in 2009, which was in all but name a European constitution, serves in principle to suggest that Europe is definitely moving towards a federal super state. The inclusion of a condition by which future decisions and directions of Europe no longer need the stringent ratification of heads of government of member states, allowing for a potentially far more powerful Europe that truly holds its own future in its hands. ...read more.

In theory, although not possible in reality due to convention, dependence and uproar, all member states have volunteered to enter the European Union, and as such could legislatively leave if they so desired. Although extremely unlikely, it serves as an important example as to the non-compulsory nature of the EU, which states in America certainly do not have. The EU, at present, does not have one single collective front. The existence of realist theory still prevails in international relations, and we can see this in many different circumstances. The tariffs which still exist on certain products in different member states, even if they are technically not within the spirit of the EU, still dominate some markets. For example the UK imposes huge tariffs on GM foods, despite their being no health risks scientifically proven, and many would suspect that this is because the majority of European exports are GM produced, and as such British GM-free foods are essentially protected. Thus I would argue that the EU; whilst certainly possessing several federalist qualities, most notably the Lisbon Treaty which contains within it several clauses which allow for a more federalist Europe in the future; at present is not a federal state. Subsidiarity and the existence of realism between the member states cements the fact that we are not Europeans yet. ...read more.