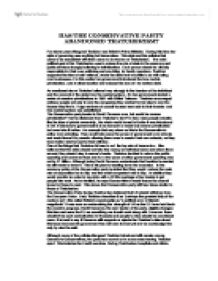 Has the Conservative party abandoned Thacherism?

Has the Conservative party abandoned Thatcherism? For eleven years Margaret Thatcher was Britain's Prime Minister. During this time her style of governing was anything but harmonious. This style and the policies that came to be associated with them came to be known as Thatcherism. The main political goal of the Thatcherism was to reduce the role of state in the economy and public services strongly believing in individualism. Each person should be directly responsible for their own wellbeing and providing for family members. Thatcher supported the idea of self-reliance, where the state had very little to do with ruling over businesses. For this matter her government introduced the free market, privatization, cuts in direct taxation and reduced the size of the welfare state. As mentioned above Thatcher believed very strongly in the freedom of the individual and the removal of the state from the market system. So her government started a series of massive privatisations in 1981 with British Telecom. ...read more.

In addition they would provide tax cuts for new jobs with a �2.6bn package of tax breaks to get people into work. As for families, he says Conservative's would freeze the council taxes for those in need. This shows that Conservative party still has ideas similar to those of Thatcherism. The Conservative Party during Thatcherism believed that UK should withdraw from the European Union. Lady Thatcher describes it as "perhaps the greatest folly of the modern era". She called Britain's membership as "a political error of historic magnitude". It was seen as undermining the strength of UK as the EU laws hold back the county's progress. David Cameron, the new leader of the party, slightly changes this idea and sees the EU as something we should work along with. However there shouldn't be such centralization in Brussels and people's voice should be considered more. It is hard to say if Cameron still supports or rejects the Thatcher's idea about this issue because his government has not been formed yet and we could judge him only by what he said. ...read more.

Nevertheless Conservatives want to make sure UK wouldn't be affected in criminal aspect, for this matter they want to create a new, integrated approach to managing country's borders, introducing Border Police Force. Here again Cameron is trying to change the Thatcherised policies of the party, bringing new, fresh ideas. Has the Conservative party abandoned Thatcherism? Considering the points made above, the most important issues over the Tories' policy remains strongly influenced by ideas of Thatcherism. Privatization was one of the biggest changes that Thatcher's government brought and David Cameron still believes in it. The fact that he wants to take private ownership further is a sign that the party is still Thacherised. However the times are different than they were during Thatcher's leadership and Conservatives are forced to change their attitudes as the electorate no longer supports the iron lady's ideas. Both sides of the argument are very hard to examine because Cameron's government has not been in power and we have not seen what they would do differently from Thatcher, we have only words and promises with which to combine both leaderships. ...read more.