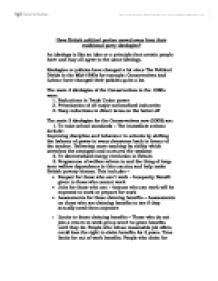 Have British Parties Moved Away From Their Traditional Ideologies

Have British political parties moved away from their traditional party ideologies? An ideology is like an idea or a principle that certain people have and may all agree to the same ideology. Ideologies or policies have changed a lot since The Political Divide in the Mid-1980s for example; Conservatives and Labour have changed their policies quite a lot. The main 3 ideologies of the Conservatives in the 1980s were: 1. Reductions in Trade Union power 2. Privatisation of all major nationalised industries 3. Deep reductions in direct taxes on the better off The main 3 ideologies for the Conservatives now (2008) are: 1. To raise school standards - The immediate actions include: Improving discipline and behaviour in schools by shifting the balance of power in every classroom back in favour of the teacher. Delivering more teaching by ability which stretches the strongest and nurtures the weakest 2. To decentralised energy revolution in Britain 3. ...read more.

Another main difference is the difference in the Leaders of the parties between now and the 1980s. In the 1980s there was Margaret Thatcher for the Conservatives and she was very strong in her views and very powerful and she single-handedly became one of the most well-known political figures of the 20th Century. Now, in 2008, you have David Cameron who takes a more relaxed approach where he tries to win the people by showing them a better place to live in. Also in 1980s Conservatives was a political party directed at the upper class and now they are trying to get a universal look at people and not separate them into classes. Another party that has changed a lot has been Labour - The main 3 ideologies of Labour in the 1980s were: 1) Restoration and strengthening of trade union powers and privileges 2) Re-nationalism of all major industries including banks and possibly land 3) ...read more.

Now, in 2008, you have Gordon Brown who takes a more series approach where he tries to change England as he creates more jobs and lifts several millions of people out of Poverty. Also in 1980s Labour was considered a party for the working class but now Labour is level headed and not creating any classes willingly. In my personal view I think that Political Parties have moved a bit away from their Traditional Ideologies but the heart and soul of each party is still just about there still especially with the Conservatives actually getting the people to listen to them again is an achievement in itself. But, I think that the most important Traditional Ideologies of the main parties are still there and are still being seen to change the country. British Political Parties in a sense have moved away from their traditional ideologies slightly but not enough to be true fully changing and differential to their original ideas and principles. ...read more.