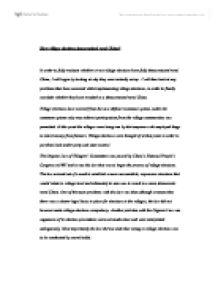 They have been able to do this by giving the township officials ultimatums, they either hold an election or the villagers will refuse to abide by the family planning social policy or the grain procurement policy. The fact that the villagers are able to yield an element of power over the township officials may suggest a more democratic country than is true. In fact it is difficult to even know exactly how many people are voting in village elections. The figures released from the government claim that at least 80% of villagers vote, this is in stark contrast with some journalists who estimate only 10% of villagers vote. Any independent studies indicate that at best the percentage voting is 17. Although candidates for election do not have to be approved by the CCP it is unlikely that a candidate who is standing for election and who openly opposes the state will get elected. Corruption and intimidation are things that must be looked at when looking at Chinese politics and village elections are no different. Apparently the CCP have no involvement in the selection of candidates. However there is evidence to the contrary in the village of Liubu in Hebei. ...read more.

It is important that villagers feels that their vote is secret and confidential, a way of ensuring this would be to allow villagers to vote in individual booths or separate rooms, this would increase the number of villagers voting honesty and without fearing intimidation. Another way to improve democracy within villages is to focus on the electoral process being used and also to ensure that local officials are all following the same guidelines and are fully trained. One of the main problems with village elections seems to stem from the fact that they work extremely well in some villages and terribly in others. In some villages elections are held using secret balloting, primaries and open nomination for village committee posts. In othet villages townships and counties have moved to stop farmers from exercising their right to choose village leaders. These are all ways that the village elections in China could be improved, if these ideas are implemented then it is likely that some time in the future we will be able to say that village elections have truly democratized China. It can be argued that China's political system is not and never will be democratic but that the introduction of village elections helps people living in rural areas to have an input into the way in which their villages are run in a more democtaric way. ...read more.