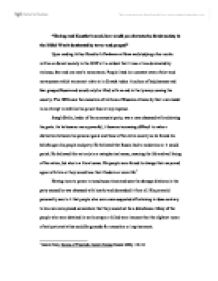 Having read Koestler's novel, how would you characterize Soviet society in the 1930s? Was it dominated by terror and purges?

"Having read Koestler's novel, how would you characterize Soviet society in the 1930s? Was it dominated by terror and purges?" Upon reading Arthur Koestler's Darkness at Noon and studying other works written on Soviet society in the 1930's it is evident that it was a time dominated by violence, fear and one man's monomania. People lived in a constant state of alert and nervousness which we cannot relate to in Canada today. A culture of helplessness and fear grasped Russia and would only be lifted with an end to the tyranny running the country. The 1930s saw the execution of millions of Russian citizens by their own leader in an attempt to stabilize his power base at any expense. Joseph Stalin, leader of the communist party, was a man obsessed with achieving his goals. As he became more powerful, it became increasing difficult to make a distinction between his personal goals and those of the entire country as he forced his beliefs upon his people and party. He believed that Russia had to modernize or it would perish. ...read more.

Such was the case at times during Rubashov's forty years in the party. He saw friends and even lovers sent to their deaths for reasons he did not agree with. He was in a position to save them but did not. He realized that if he tried to save them he too would be silenced. Many people, both civilians and military personnel, would have found themselves in similar positions. During show trials when bogus evidence was presented there were undoubtedly people present who could disprove it but did not because it was unsafe to do so. The culture of fear and paranoia prevented people from crying foul and seeking justice. The sense of community was lost as neighbors were suspicious of each other or, as in the Ukraine during the famines, even competed for scarce resources to survive. There, the peasants were forced to give up their crops and starve. The only justification they were given was that they were doing their country a great service. 2 People who did speak out or organized opposition against Stalin were handled brutally, eliminated without hesitation. ...read more.

They would have died for reasons such as suggesting plans different from those of Stalin.3 Rubashov, having spent forty years in the service of the party, had seen many changes in society. What he and the original Bolshevik revolutionaries had set out to accomplish was not in place in the 1930s. He described life under Stalin as: "The Party denied the free will of the individual- and at the same time it exacted his willing self sacrifice. It denied his capacity to choose between two alternatives-and at the same time it demanded that he should constantly choose the right one."4 He realized that the goals he had initially set out to achieve as a revolutionary were now being pursued using terrible methods but ultimately was still unsure of whether it would all be worth it in the end. When Stalin took control of Russia the country was in a state of instability. He hoped to bring it to great power but went about according to his own will and without any thought of causalities. His obsession with his dream caused many wrongs to be committed. These injustices came to a peak in the 1930s during a time of great purges terror. This caused Russians to live in a culture of fear, suspicion, apprehensiveness and doubt. ...read more.