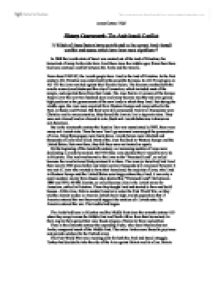 History Coursework: The Arab-Israeli Conflict 1) Which of these factors have contributed to the current Arab-Israeli conflict and assess which have been most significant? In 1948 the Jewish state of Israel was created out of the land of Palestine; the homeland of many Arabs who have lived there since the middle ages. Since then there has been continual conflict between the Arabs and the Israelis. From about 1500 BC, the Jewish people have lived in the land of Palestine. In the first century AD, Palestine was controlled by the powerful Romans. In AD 70 and again in AD 135 the Jews revolted against their Roman Rulers. The Romans crushed both the revolts severely and destroyed the city of Jerusalem, which included most of the temple, and expelled them from their lands. The Jews fled to all corners of the Roman Empire over the next two hundred years and many became wealthy and even gained high positions in the governments of the new lands in which they lived. But during the middle ages, the Jews were expelled from Western Europe and many settled in the East, in Russia and Poland. But they were still persecuted. Nearly all Europeans were Christian and in many countries, they forced the Jews to live in separate areas. They were not allowed land or allowed to vote. Such anti-Jewish behaviour is known as anti-Semitism. But in the nineteenth century the Russian Tsar was assassinated in 1881, there were many anti-Jewish riots. Then the new Tsar's government encouraged the persecution of Jews. Many Synagogues were burnt down, Jewish homes were attacked and thousands of Jews were killed. Most of the Jews fled back to Western Europe and the United States. But even there, they felt they were not treated as equals. By the beginning of the twentieth century, an increasing number of Jews were demanding a Jewish homeland. By 1914 these Jews decided that it would have to be in Palestine. ...read more.

When the West bank was taken over by Israel, a further 350 000 Palestinians fled from their homes, mostly to Jordan. There, many joined the PLO and increased the number of attacks on Israel. The Israelis became increasingly annoyed. So, in 1968 the Israelis launched a full-scale attack on a major Fatah base in Karameh. With the aid of Jordanian troops, the PLO managed to knock out several Israeli tanks and planes and killed 28 Israeli troops. This inspired thousands of Palestinians to join the PLO. With the increased strength and numbers, between 1967 and 1970, Fatah forces managed to kill over 500 Israeli troops. The PLO has also carried out acts of extreme terrorism. In 1972, nine Palestinians murdered eleven Israeli athletes at the Olympic Games in Germany. This made the PLO unpopular at first, but when people learnt more about the Palestinian's situation and how they were subjected to refugee camps with no hope, the question of "What's the difference between terrorism and freedom fighting?" came up. The Palestinian Liberation Organisation has contributed largely to the current situation. Due to the Palestinians retaliating against their bad conditions, the Israelis fought back just as harshly to defend themselves. The circle of hate continues to repeat itself, with both sides wanting revenge. The PLO has contributed a lot to the fighting and if they had not been set up, then there would be less fighting. However, with the Palestinians in such a desperate situation, it would only take time for a group such as the PLO to emerge out of the hate. On 8th December 1987, an Israeli army vehicle crashed into a lorry killing four of the Palestinians on board. Rumours spread that it was a deliberate act of revenge for the killing of two Israelis two days before. The funerals became mass demonstrations. At one of the funerals a youth was shot dead by an Israeli soldier. ...read more.

The source differs greatly from the others as it is the only "typical" Israeli viewpoint. None of the statements in the sources have any evidence, which questions its reliability. The source explains how the PLO have, "more sophisticated weapons than most armies." From my own knowledge I know that this is false as it is a fact that Israel has much more modern and advanced weaponry as it is supplied by other countries, mainly the USA, with a vast amount of money and weaponry. All of this questions the source's reliability. However, it is still a useful possible insight into Israeli opinion. Source F is a response to the murder of Mr Sieff, managing director of Marks and Spencer and who happened to be a Jew. The source condemns the PLO and even compares them with "Barbary pirates". The source is an opinion and not a fact. The author of this source wrote it for the public and after this kind of event, it was biased against the PLO. The source was published in a history book and is most likely to be reliable. After examining the sources, we can see why the interpretations of the sources D and E differ. Both of the sources are probably biased to their own opinion and belief. We can see from these sources how each side of the conflict views the other and how over the years the hate has increased. The two sources are different because on both sides, the hate of the other side has been increased as the young are brought up to hate their "enemy". If this continues the issue may not be resolved for a long time. Their different religious groups nearly make the situation impossible to solve, as both sides fight fiercely for the same piece of land. This is why they have never come to a successful negotiation as nobody is willing to sacrifice anything for peace. If each nation continues to disagree with each other over certain pieces of land; there will never be a solution to this issue. ?? ?? ?? ?? James Cotton 11Q1 ...read more.