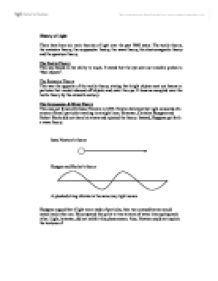 Huygens suggested that shadows are a result of light bending round corners. Thus, he proposed that light was a wave. But this could not explain the photoelectric effect. However, there was a problem with the theory, as other waves e.g. water and sound waves needed a medium to travel. Yet, light could travel through space to reach the earth. Hooke developed a theory that space was not empty, but could not prove it. Particles do not need a medium in which to propagate, thus Newton's particle theory continued to reign until 1850. Newton explained that when light enters water from air, the velocity of the particle will increase in the water. ...read more.

The wave theory thus became an accepted theory of light. However, although it provided an explanation of phenomena such as interference and diffraction, it fails to explain situations like the photoelectric effect, which is the emission of electrons from the surface of solids when irradiated. The Quantum Theory Finally in 1905, Einstein explained that the energy of a light beam is not spread evenly, but concentrated in certain regions which propagate like particles. These he called 'photons'. Light apparently has a dual nature. The particle and wave theories are not conflicting but rather they are complementary. In cases involving the exchange of energy, the particle nature of light dominates the wave nature, whereas for experiments involving interference and diffraction, where light interacts with light, the wave nature dominates. Today, the quantum theory dominates the explanation of the theory of light. ...read more.