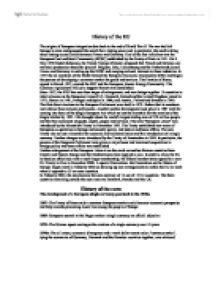 History of the EU.

History of the EU The origins of European integration date back to the end of World War II. The war had left Europe in ruins and prompted the search for a lasting peace and, in particular, the need to bring about lasting reconciliation between France and Germany. One of the first initiatives was the European Coal and Steel Community (ECSC) established by the Treaty of Paris in 1951. On 9 May 1950 Robert Schuman, the French Foreign Minister, proposed that French and German coal and steel production should be 'pooled'. Belgium, Italy, Luxembourg and the Netherlands joined France and Germany in setting up the ECSC and merging national interests in these industries. In 1957 the six members of the ECSC formed the European Economic Community (EEC) and began the process of developing a common market for goods and services. The Treaties of Rome, signed in March 1957, created the EEC and the European Atomic Energy Community. The Common Agricultural Policy to support farmers was established. Since 1957, the EEC has seen four stages of enlargement, and now brings together 15 countries in what is known as the European Union (EU). ...read more.

In February 2002, the euro became the sole currency of 12 out of 15 EU countries. The three countries remaining outside the euro zone are Denmark, Sweden and the UK. History of the euro The development of a European single currency goes back to the 1950s. 1957: The Treaty of Rome said a common European market could increase economic prosperity and help towards promoting closer ties among the people of Europe 1969: European summit at the Hague makes a single currency an official objective 1970: The Werner report envisages the creation of a single currency over 10 years 1970s: The oil crises, economic divergence and a weak dollar meant only a "currency snake", tying the currencies of Germany, Denmark and the Benelux countries together, was achieved 1979: The European Monetary System (EMS) is created, with the exchange rate mechanism (ERM) defining rates in relation to the European Currency Unit (ECU), a quasi-currency representing an average of participating currencies. 1986: Single European Act The Single European Act, which modifies the Treaty of Rome is signed and comes into force the following year. ...read more.

1999: Stage three of EMU: The euro is launched as an electronic currency used by banks, foreign exchange dealers, big firms and stock markets. Exchange rates of the participating currencies are set and euro zone countries begin implementing a common monetary policy. 2000: A referendum in Denmark ends with 53% of Danish voters rejecting entry to the euro. 2001: Greece joins the euro. The UK's Labor government, re-elected for a second term, says it will assess its five tests for euro entry within two years. 2002: Euro coins and notes become legal tender and national currencies become obsolete. Sweden announces plans to hold a referendum on euro entry on 14 September 2003. 2003: The UK Government says it has decided the time is not right to recommend euro entry in a referendum. Chancellor Gordon Brown says he will return to the issue again early in 2004. The EU's Aims The Eu was set up to allow all European countries to trade easily (free trade) because before the Eu was set up all European countries had to pay fees whenever they traded with each other these where known as trade barriers. They also aim to bring countries closer together. ...read more.