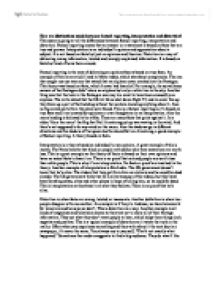 How are distinctions made between factual reporting, interpretation and distortion?

How are distinctions made between factual reporting, interpretation and distortion? This essay is going to tell the differences between factual reporting, interpretation and distortion. Factual reporting means that an answer or a statement is based on facts that are true and proven. Interpretation is an individual's opinion and appreciation about a subject. It is not based on facts but just on opinions and theories. Distortion is a way of delivering wrong information, twisted and wrongly explained information. It is based on facts but kind of turns them around. Factual reporting is the way of delivering an opinion/theory based on true facts. An example of this is an article I read in Metro today, which was about conspiracies. The one that caught my eye was one that stated that an airplane never crashed into the Pentagon. ...read more.

And there's not supposed to be any wind on the moon. Also the shadows go in different directions and the shadow of the space shuttle should fall on Armstrong, a good example of factual reporting. A theory based on facts. Interpretation is a theory based an individual's own opinion. A great example of this is racists. The Nazis believe that black or people with darker skin than westerners are worth less. This is a great example as this theory of theirs is based on their own opinions and have no actual facts to base it on. There is no proof that colored people are worth less than white people. This is why it's an interpretation. No facts or proof are involved in the theory. Another example of interpretation is Bin Ladin. The US government doesn't know that he's alive. ...read more.

You always say to yourself, "That's not exactly what happened." Sometimes the media exaggerate to find a big audience. They do what I like to call, 'Stretch reality.' It's a clear case of distortion because they twist the truth or give an inaccurate point of view. As a conclusion or to answer the question I would like to say that the difference or the distinctions between factual reporting, interpretation and distortion is the amount of facts they are based on. Factual reporting is based on only facts to make a clear image of a theory, event or opinion. Interpretation is based on opinions but no facts. Only the people who made the theory, it's only based on things that are going on inside those people's heads. Distortion is based on facts but mostly told the opposite way or twisted to change the way people think of it. It often tries to make the facts inaccurate. Magnus Haag 2002-11-05 ...read more.