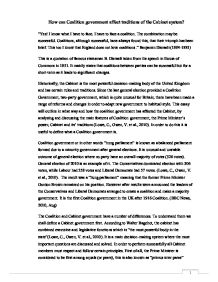 How can Coalition government affect the traditions of the Cabinet system?

How can Coalition government affect traditions of the Cabinet system? "Yes! I know what I have to face. I have to face a coalition. The combination may be successful. Coalitions, although successful, have always found this, that their triumph has been brief. This too I know that England does not love coalitions." Benjamin Disraeli (1804-1881) This is a quotation of famous statesman B. Disraeli taken from the speech in House of Commons in 1851. It mainly states that coalitions between parties can be successful but for a short-term as it leads to significant changes. Historically, the Cabinet is the most powerful decision-making body of the United Kingdom and has certain rules and traditions. Since the last general election provided a Coalition Government, two-party government, which is quite unusual for Britain, there have been made a range of reforms and changes in order to adapt new government to habitual style. This essay will outline in what way and how the coalition government has affected the Cabinet, by analysing and discussing the main features of Coalition government, the Prime Minister's power, Cabinet and its' traditions (Lowe, C., Owen, V. et al., 2010). In order to do this it is useful to define what a Coalition government is. ...read more.

Another important feature is the Cabinet Committees which are also the part of the Cabinet. Originally, Committees were created to reduce the workload of the Cabinet and are strictly classified. Regular meetings between the Prime Minister and secretary are held in Cabinet Committees, called bilateral meetings. Decisions made there have the same power as decisions made in the Cabinet (Lowe, C., Owen, V. et al., 2010). Overall, creation of the Coalition Government was perceived ambiguously and variously commented. "A kind of cross between a bulldog and a Chihuahua" or "They have created a mongrel breed" as it was said by Conservative mayor of London Boris Johnson. (Stratton, A and Booth, B 2010) Since the Coalition between Conservatives and Liberal Democrats was created several changes has been made inside and outside the Cabinet. Firstly, with the Deputy Prime Minister the "first among equals" concept of the Prime Minister becomes in some extend controversial, mainly because the Prime Minister's party now has to find a "common ground" with the party they cooperating. For instance, David Cameron has to negotiate with Nick Clegg about all main decisions and plans. Sometimes negotiations end without a common agreement or compromise. For instance, one of the major disagreements between both sides was the question about nuclear power subsidizing, which could split Tories and Liberal Democrats (BBC News 2010). ...read more.

It is useful to mention about all reforms in Cabinet Committees made and a creation of a Coalition Committee, which was formed in order to consider issues relating to the operation of the Coalition. As well as the Prime minister the Deputy Prime Minister now also has to attend regular Committee meetings. In other words all committees now are co-chaired by two leaders. Therefore traditional "Bilateral meetings" has taken a new shape (CabinetOffice.gov.uk, 2010). To sum up, there are a range of rules and traditions of the Cabinet Government that have been settled over the long time. These are the doctrine of Collective Responsibility, collegiality and secrecy in the Cabinet, the status of the Prime Minister, being "primus inter pares" as well as a public figure, the Prime Minister's traditional powers, such as patronage power. However with the creation of Coalition Government many of these traditions have changed and reformed. In Coalition, the Prime Minister has to negotiate many decisions with Deputy Prime Minister which weakens his status and powers; there also have to be equality inside the Cabinet between two parties, reshuffle of Cabinet Ministers and appointment of extra. Therefore transformation of Cabinet is considered to take place. Back to the quotation of Benjamin Disraeli, the Coalition Government may be successful in many ways, but it also replaces the old traditions of the Cabinet and creates new and unusual governing style. ...read more.