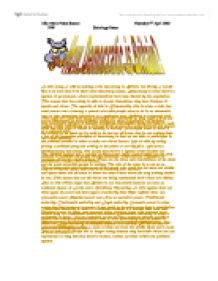 How Democratic is Britain?

In this essay I will be looking at the democracy in Britain, but firstly I would like to be sure that it is clear what democracy means. Democracy is when there's a system of government, whose representatives have been elected by the population. This means that the society is able to choose themselves, they have freedom of speech and views. The opposite of this is Dictatorship, this is when a ruler has total power over a country, a person who tells people what to do in an autocratic way or who determines behaviour in a particular area. Politics is concerned with power differences at every levelling society its about negotiation and decision making within individuals at a personal level, groups at a personal level and groups at a national level. This topic is a topic that many sociologist are interested in, they want to find out how democratic Britain is because everything sociologists study are linked to each other and this topic is linked to equality in society. ...read more.

Non-co-operative power is when someone refuses to follow what the person in power order therefore the one who refuses will become empowered themselves. Traditional authority is when it is accepted because it's always been done that certain way, it's traditional within the culture. Charismatic authority is when a person has something special about them in their personality that the public is drawn to. Legal authority is accepted because it is the law, you can be sent to prison for disobeying the law. There are three factors about the state that seem to support Marx's view, they are: 1. most Mp's are white. 2. most of them are from the middle class and 3. most of them are men. Due to this many groups are no longer voting because they feel their views are not represented or they feel that there is racism, sexism and bias within the political system. The pluralists argue that the states approach is towards everyone in society. Including the different ethnic groups, all ages, all genders and all other groups that exist in society. ...read more.

These techniques are a type of propaganda because they want you to believe something that is not exactly true but as long as they look like the good ones it doesn't matter. I have come to my conclusion of this essay, I believe that Britain is democratic because we get to vote in the Members of Parliament who are there to represent us. But there is a minority of people who have an incredible power within our government who make Britain and undemocratic country because it's up to them to pass a law or any other decisions. This wouldn't be a problem if they thought the way the nation do but their backgrounds have a great influences in the way they think and their thoughts are very different to ours. I don't agree with the present parliamentary system because those who are involved in the system are elite, I think that if they wanted a true democratic Britain they would bring in a new system to vote in who we want to be at the top deciding what the right thing would be for our society, including the royal monarchy. Alba Maria Pintos Suarez Thursday 3rd April 2002 10W Sociology Essay ...read more.