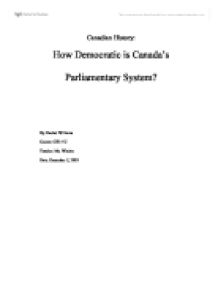 How Democratic is Canada's Parliamentary System?

Canadian History: How Democratic is Canada's Parliamentary System? By: Rachel Williams Course: CH1-4U Teacher: Ms. Whelan Date: December 5, 2003 Canada's parliamentary system, although modeled after its British Imperial motherland, is completely unique to Canada. After careful analysis, it is evident that while it may not be democratic in theory or law, Canada's parliamentary system is most definitely democratic in practice. Democracy is defined as the free and equal right of every person to participate in a system of government; this is often practiced by electing representatives of the people by the people. In Canada, democracy is shown through among other things, its election process which involves the equal right of every citizen to vote. Also, democracy is apparent through Canada's House of Commons, who are elected members of parliament and finally, through the role that the Prime Minister is plays in the governmental system. Canada's election process is an essential part of its parliamentary system and what makes the structure democratic in practice. For example, in Canada "all Canadian citizens [of] at least 18 years of age on election day are eligible to vote, with very few exceptions."i In fact, as of October 31, 2002 law was changed to allow even people serving all types of prison sentences to vote.ii Obviously, this demonstrates the democratic nature of the system as it allows all citizens to participate in government without any bias or prejudice. ...read more.

leader once his party has won the most amount of seats in Parliament.ix This means that the Prime Minister is an excellent representation of the wishes of the citizen. Unlike Canada, in the United States, the individual president is elected and is not necessarily from the same party as the leaders in the upper and lower houses. In this situation, the legislative and the executive branch do not work together, and many bills are vetoed.x This system is not as democratic as one individual has the power to stop legislature. Finally, the Prime Minister has to be elected by his/her party to be the leader.xi This indicates that the leader of the country is going to be the best representation of his/her party and the best leader for the country. This system is democratic because even the leader has to be voted in by its party, who have been formed by Canadian citizens. Overall, the Canadian Parliamentary system is relatively democratic because of the role of the Prime Minister and the way in which he receives his title. On the other hand, the Canadian parliamentary system could be considered very undemocratic in law and in practice. Firstly, the senate, which is appointed by the governor general, are not elected and are therefore not democratic. ...read more.

Finally, although the pressure to vote with ones party is strong, it is not law. Ultimately, it may stop an individual from "getting ahead" in the political system, but an individual can always vote against their party when passing a law. Therefore, it is evident after closer look that the Canadian Parliamentary system is relatively democratic. Ultimately, the Canadian Parliamentary system is democratic in part because of its election process, its House of Commons, and the role of its Prime Minister. Although many Canadians feel that the Canadian Parliamentary system could be more democratic, worldwide, Canada is looked upon as a strong, self-governing nation. Democracy is an incredibly important principle in developing a nations legislature, structure, and identity. Since its confederation in 1867, Canada has moved closer and closer to becoming a more democratic nation, and it continues to do so today. i "Canada's Electoral System," Elections Canada Homepage. 20 September 2001, <http://www.elections.ca/content.asp?section=gen&document=index&dir=ces&lang=e&textonly=false> ii "The Chief Electoral Officer of Canada Announces the Application of the Supreme Court Decision on the Voting Rights of Incarcerated Electors," Elections Canada Homepage. 31 October 2002, <http://www.elections.ca/content.asp?section=med&document=oct3102&dir=pre&lang=e&textonlyfalse> iii same as i iv "Election Handbook for Candidates, their Official Agents and Auditors," Elections Canada Homepage. 22 February 2002, <http://www.elections.ca/content.asp?section=pol&document=2019002&dir=ehc&lang=e&anchor=2.1&textonly=false#2.1> v Forsey, E. How Canadians Govern Themselves (Ottawa: Library of Parliament, 1980), p.50. vi Forsey p.4 vii Forsey p.38 viiiForsey p.52 ixForsey p.4 xForsey p.35 xiForsey p.39 xii Forsey p.49 xiii Forsey p.49 ...read more.