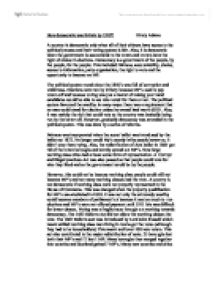 How democratic was Britain by 1918

How democratic was Britain by 1918? Kirsty Adams A country is democratic only when all of their citizens have access to the political process and their voting system is fair. Also, it is democratic when the government is accountable to the voters and voters have the right of choice in elections. Democracy is a government of the people, by the people, for the people. This included: fairness, accountability, choice, access to information, party organisation, the right to vote and the opportunity to become an MP. The political system round about the 1850's was full of corruption and unfairness. Elections were ran by bribery because MP's used to pay voters off and because voting was just a matter of raising your hand candidates would be able to see who voted for them or not. The political system favoured the wealthy in many ways: there was a requirement that no man could stand for election unless he owned land worth �610. ...read more.

This meant well over 100 new voters. This act also contributed to the major redistribution of seats. 35 boroughs lost both their MP's and 17 lost 1 MP. Many boroughs then merged together into counties and Scotland gained 7 MP's. Many new counties and cities gained an MP. The 1884 Reform Act gave working class people in the countryside the vote (this was very ineffective because of industrialisation and most people were moving towards the town) but still not all men had the vote and no women had the right to vote yet. But by 1918 women over 30 and men over 21 had the right to vote. Access to information plays a demanding role in how democratic Britain was becoming. One of the reasons that working class people could not get a say in the running of the country was down to literacy. As time progressed people were more able to understand what was going on through the growth of newspapers and libraries. ...read more.

In conclusion, although the political system was fairer due to the ballot act and the redistribution of seats act still people did not have the vote, especially women under 30. Also there were still very few working class candidates. The House of Commons was becoming more powerful than the Lords which meant a peoples government. People now had choice on who to vote for as corruption was diminished. Also, as access to information was more available it was easier to see which party they wanted to vote for. In general party organisation was improved through things like branch associations etc. The chance to become an Mp was much easier for other classes. Britain was on its way to becoming democratic although more would have had to be done to ensure fairness and choice so the public would have a government of the people, by the people, for the people. ...read more.