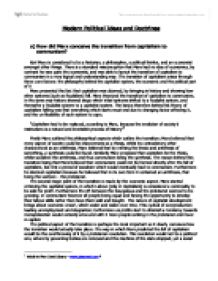 How did Marx conceive the transition from capitalism to communism?

Modern Political Ideas and Doctrines a) How did Marx conceive the transition from capitalism to communism? Karl Marx is considered to be a historian, a philosopher, a political thinker, and an economist amongst other things. There is a standard misconception that Marx had no idea of economics, by contrast he was quite the economist, and was able to layout the transition of capitalism to communism in a very logical and understanding way. The transition of capitalism arises through three core factors: the philosophy behind the capitalist system, the economic and the political part of it Marx presented the fact that capitalism was doomed, by bringing in history and showing how other systems (such as feudalism) fell. Marx theorized the transition of capitalism to communism, in the same way history showed stage which tribal systems shifted to a feudalist system, and thereafter a feudalist system to a capitalist system. The basics therefore behind his theory of capitalism falling was that everything which starts must end due to changing factor affecting it, and the un flexibility of each system to cope. "Capitalism had to be replaced, according to Marx, because the evolution of society's institutions is a natural and inevitable process of history"1 Firstly Marx outlined the philosophical aspects which outline the transition; Marx believed that every aspect of society could be characterizes as a thesis, whilst its contradictory other characterized as an antithesis. ...read more.

b) How closely did the Soviet experience of "building socialism" conform to Marx's theories? To a great extent the Soviet Union did experience a build of Socialism, which conformed to Marx's theories; these mainly being through the periods of the 1917 revolution, and the period of Leninism. To a great extent however this "building of socialsm" was and is still considered as a charade for historians as it contradicted many aspects of Marx's theories. I will mainly concentrate on Lenin and Stalin*, and on how close they came to building socialism according to Marx. Lenin has been known both for his harsh line when it came to doing work, as well as a major political thinker; characterized often as a man of great intellect. After supervising a successful revolution in 1917, Lenin began building socialism. Lenin tweaked the communist theory before the revolution in order for it to attract the common people; he made use of slogans such as "Peace, Bread and Land", and published "State and Revolution". For this reason he has been portrayed as the father of soviet communism, but was he? To a great extent Lenin persisted, and made it known that the revolution and setting up of socialism was a transitional dictatorship of the workers, until true communism could be achieved. Lenin had to make the theory popular in order for it to gain support from the people. ...read more.

Stalin preferred to take a hard line when he came to power, executing millions of people and sending thousands to the gulags. We can therefore see the rift of Stalinism in accordance to Marx's theories, in the late 1930's when tension surfaced between Germany. Stalin started building upon the foundations of Lenin in completely different manners, making the party more centralized and eliminating even the smallest of enterprises. The rule of Stalin became more totalitarian at the time when it shouldn't have; since socialism was supposed to be a transitional stage inorder to fight off counter-revolutions, since this threat had been almost completely eliminated by Lenin, Stalin still continued with a ruthless approach of building arms, and forming a more high secured secret police. Finally Stalin insisted on state involvement, in many affairs including social, and economical. This building of socialism did not conform to Marx's theories because state involvement was supposed to gradually diminish, whilst under Stalin it was strengthened. In conclusion as time passed and Soviet leaders changed, the building of Socialism started rifting even more and more from Marx's theories. Khrushchev concentrated on the second world war and built the Berlin War, instead of concentrating on building socialism. Whilst Brezhnov and Gorbachov seemed to lose their grip on solidarity within the USSR. Perhaps Lenin must be considered to be the closest in conforming the building of socialism in accordance to Marx; to a great extent Stalin also achieved this, although mainly due to the solidarity he built within the USSR. ...read more.