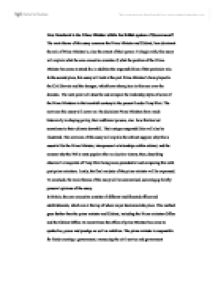 How Dominant Is the Prime Minister within the British system of Government?

Thatcher is renowned to having a dominant style in which she had a direct approach, whilst political writer Martin J Smith described her style as being autocratic. Wilson, in contrast even though a good communicator, was normally keen to get popular agreement within the party, to impose his personality on a particular area of policy. Generally, the prime minister consults with the Chancellor of the Exchequer and treasury before economic, foreign policy initiatives are made, however the ultimate decisions are made by the PM who is vital in determining policy. Over the past forty years in the UK, prime ministers had to play an important part in various initiatives such as, industrial trade unions and issues in Northern Ireland. PM's on the other hand might delve into areas that they passionately believe in, which might sometimes risk upsetting other ministers. James Callaghan the PM during the late seventies intervened in educational and health matters, while Margaret Thatcher bought in the poll tax, Tony Blair on his thinking put into operation the millennium dome, had a keen interest in law and order and supported President Bush in the Iraq war. ...read more.

Even though Tony Blair's style is more of a superior figure, who makes executive decisions which he feels is best for the country regardless of what the majority of cabinet might think. Prime Ministers are clearly in a powerful position of authority; however, ministers are also in a strong position of the heads of departments, as these departments play an integral role in central government. Various observers have described the present Prime Minister leadership as being presidential. If Blair is viewed as more presidential than some of the past Prime Ministers like Major, or Douglas-Home, maybe the contrast is not as significant when compared to leaders in the vein of Lloyd George, Churchill and Thatcher. Generally, Prime Ministers are in a strong confident position when things are going well, more presidential in periods of war, (Coxall, Robins and Leach,2003:200). The final analysis On the Prime Minister is that they have around them ministers who have needs of looking after what is best for their department and themselves. The quest of self-interest can weaken the combined ambitions of government and the role of the PM; the task of the prime minister therefore is to act as an entrepreneur who gives support and benefits to ministers in return for their support, which is important. ...read more.