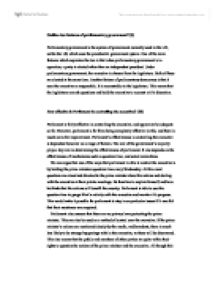 How effective is Parliament in controlling the executive?

Parliament is able to use this question time to gauge Blair's activity with the executive and monitor it's progress. This would make it possible for parliament to step in on particular issues if it was felt that their assistance was required. Parliament also ensures that there are no privacy laws protecting the prime minister. This can also be used as a method of control over the executive. If the prime minister's actions are monitored closely by the media, and broadcast, there is much less likely to be strange happenings with in the executive, as these will be discovered. This also means that the public and members of other parties are quite within their rights to question the actions of the prime minister and the executive. ...read more.

Parliament is also fairly effective in controlling the executive due to the huge procedure required to pass laws. This means that the executive cannot just make decisions regardless of the other governing bodies. Suggestions have to be passed through the commons, and then on into the Lords. In the Lords they will be looked at closely for errors and their implications on other aspects of the constitution and society. This process keeps on taking place until a compromise is found between the Lords and the commons. This is an effective way of controlling the executive. In conclusion, I think it can be said that parliament is adequate in controlling the executive, however is far from being 100% effective. There are a number of ways in which the power of the executive could be controlled better, and the UK parliament falls down on these. However, the adequacy is there, and that's what really matters for now. ...read more.