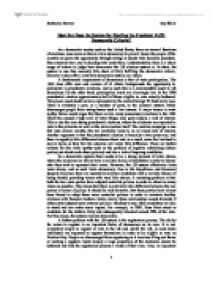 How Far Does the System for Electing the President Fulfil Democratic Criteria?

How Far Does the System for Electing the President Fulfil Democratic Criteria? In a democratic society such as the United States, there are several functions of elections, none more so than to allow democracy to prevail, hence the people of the country are given the opportunity, through voting, to decide who becomes president, thus everyone has a say in deciding who leads them. Understandably, there is a whole range of criteria to judge how democratic the US election system is. In short, the system is one that currently falls short of fully fulfilling the democratic criteria, however it does offer a relatively democratic system as a whole. A fundamental requirement of democracy is that of voter participation. The USA does offer men and women of all ethnic backgrounds the opportunity to participate in presidential elections, and as such this is a commendable asset to US democracy. On the other hand, participation levels are alarmingly low. In the 2000 presidential election approximately half of those eligible to vote actually bothered. This places much doubt on how representative the elected George W Bush really was. There is evidently a part, or a number of parts, to the electoral system which discourages people from voting hence such a low turnout. ...read more.

This means people have to keep re-registering so many will simply not bother. Steps were taken by president Clinton in 1993 to increase the number of people registered to vote. He introduced the 'Motor Voter Bill', which effectively allowed people to register to vote as they applied for a driving license. As a result, there was an increase in voters by 5 million. Yet still, by 2000 only 66% of Americans were registered to vote. It should be pointed out that of those registered, 75% or so do actually turn out to vote. In order to fulfil democratic criteria, everyone eligible need to vote in elections so that those elected will be representative of the people's views. Although this registration process appears to decrease the level of democracy, the fact is that there is nothing actually preventing those eligible from registering to vote. The process is just perhaps a little more difficult than it should be. Perhaps the most alarming aspect of the US electoral system is the fact that a candidate can win the presidency and yet poll less votes than their opponent. This occurred in the 2000 presidential campaign where Bush won the presidency for the Republicans yet had fewer votes than his opponent, Al Gore of the Democrats. ...read more.

However it has become apparent that candidates have found 'loop holes' in these precautions and thus there has been a growing trend of 'soft money' (see the table below). There is much controversy over where the line is drawn on what this 'soft money' can be spent on. President Clinton used carefully planned politically orientated events to generate this money such as 'Golf with the President' and trips on Air force One. The system for electing the president does however fulfil some democratic criteria. There is a secret ballot which eradicates corruption and any possible intimidation. The system also offers a coherent method of voting, as the voter simply has to vote for the candidate that they would like to take office. There are unarguably a high number of problems associated with the US system of electing a president and many areas that do not completely fulfil democratic criteria. Voter registration is too complicated, voting infrastructure is often old fashioned, voter choice is significantly limited, votes count unequally and are disproportionate and the media fails to remain impartial due to the influence of the wealthiest candidates. However the system does have its merits and does contain some aspects of democracy. There is a secret ballot, campaign regulations are in place and the election system is simple and coherent enough for the voter to understand. ...read more.