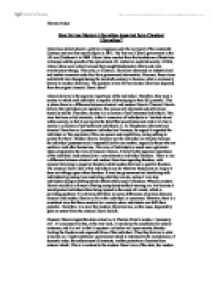 How far has Modern Liberalism departed form Classical Liberalism? Liberalism did not denote a political allegiance until the early part of the nineteenth Century, and was first used in Spain in 1812. The first real Liberal government in the UK was Gladstone's in 1868. Liberal ideas resulted from the breakdown of feudalism in Europe and the growth of its replacement of a market or capitalist society. At first, Liberal ideas were radical because they sought fundamental reform and even revolutionary change. This early, or Classical, liberalism advocated an industrialized and market economic order free from government intervention. However, these views and beliefs later changed during the twentieth century, to become, what is commonly known as modern liberalism. The question is how far has modern liberalism departed from the original classical liberal ideas? Liberals believe in the supreme importance of the individual. Therefore, they want a society in which each individual is capable of developing to their full potential. This is where there is a difference between classical and modern liberals. Classical liberals believe that individuals are egoistical, this means self-interested and self-reliant, basically selfish. ...read more.

Classical liberals regard the state as best as, in Thomas Paine's words, a 'necessary evil'. It is necessary in that, at the very least, it lays down the conditions for orderly existence; and it is evil in that it imposes a collective will upon society, thereby limiting the freedom and responsibilities of the individual. Thus they believe in what is known as a 'night watchman' government which is restricted to the maintenance of domestic order, the enforcement of contracts, and the protection of society from external attack. This is in contrast to the modern liberal view of the state, the modern liberal view is that the state is invested with social responsibility for its citizens. It is seen not merely as a threat to individual liberty, but, in a sense, as its guarantor. Unlike classical liberals modern liberals have been prepared to view the state positively as an enabling state, exercising an increasingly wide range of social and economic responsibilities. Linked to that point, is the fact that classical liberals believe that the state diminishes freedom, whilst modern liberals believe that the state enlarges freedom. ...read more.

Whereas modern liberals believe in an altruistic society where individuals have concern for the interests and welfare of others, and people try to help others to achieve their goals. Classical liberals believe in safety net welfare for society which is the bare minimum as opposed to welfare cradle to the grave which is welfarism for life. Then both believe that inequality will always be present in society however, classical liberals believe that it has to be this way in order for a meritocracy to be present, whereas modern liberals believe that the government should intervene and redistribute the wealth in order to give everyone a chance. In conclusion, it is obvious that there are several distinct differences in the beliefs of classical and modern liberals. In my opinion they are not as dissimilar as to be classified as separate distinct political ideologies, however there are at different ends of the liberal scale. For example, the two different ideas about how the economy should be run, they are not completely different they both agree that there should be private enterprise, it is just that they differ in how much private enterprise there should be, the same applies for the society, individual and state. Thomas Taylor ...read more.