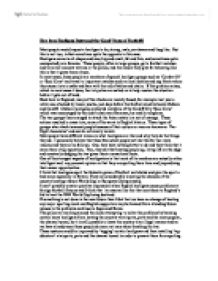 How have Hooligans Destroyed the 'Good' Name of Football?

How have Hooligans Destroyed the 'Good' Name of Football? Most people would expect a hooligan to be, strong, male, un-shaven and thug like. But this is not true, in fact sometimes quite the opposite in this case. Hooligans come in all shapes and size, big and small, fat and thin, and sometimes quite unexpectedly are females. These people, often in large groups, go to football matches and terrorize innocent victims or the police; and the reason they give for behaving like this is that it gives them a buzz. In most cases, these people are members of special hooligan groups such as 'Combat 18' or 'Soul Crew' and travel to important matches such as local derbies and cup finals where they cause riots in cafes and bars with the aid of tables and chairs. If this problem arises, which in most cases it does, the riot police are called on to help resolve the situation before it gets out of hand. ...read more.

One, they have nothing better to do and they think that it earns them a big reputation; Two, they say that beating people up, living life on the edge and constantly dodging the law gives them a sensational buzz. One of the strangest aspects of hooliganism is that most of its members are actually rather intelligent and my personal opinion is that they are spoiling there lives and jeopardizing their career opportunities I think that hooligans spoil the fantastic game of football worldwide and give the sport a bad name especially in Britain. They are considerably lowering the chances of the country hosting a future World Cup or European Championship. It can't possibly create a positive impression when English hooligans cause problems at foreign football fixtures and I think that its reasons like this that contribute to England's bid to host the 2006 World Cup being declined. ...read more.

Today if a white British person attacks an Asian it is almost always classed as a racial attack even though this may not be the case and I feel that this is unfair because history suggests that if the attack was by an Asian on a white British man it may not be seen as racially provoked but a standard assault. If I was to conclude who hooligans are and what the do in a couple of sentences then I would say: hooligans cause problems for what they call a laugh and do not think about anyone apart from themselves even though in most cases they are fairly intelligent and have families. The police are trying to stop this madness but are currently failing, but with the help of the Football Association, the public and an electronic tagging method, I believe that we can reduce the number of hooligans in Britain but in my opinion the problem would still remain. ...read more.