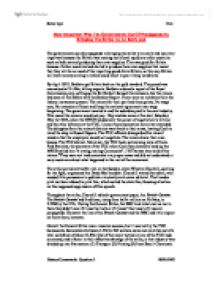 How Important Was The Governments Use Of Propaganda In Bringing The Strike To An Early end.

The strike period started for real on the Sunday, when Winston Churchill, spoiling for the fight, engineered the Daily Mail incident. Churchill visited the editor, who needed little persuasion to publish a virulently anti union editorial. The London print workers refused to print this, which suited the state fine, focusing attention on this supposed suppression of free speech. Throughout the strike, Churchill edited a government paper, the British Gazette. The British Gazette had 8 editions, rising from half a million on 5th May, to 2.25M by the 12th. During the General Strike, the BBC took what ever came to them they didn't care if it was the truth or if it wasn't but most of it was all propaganda. However the lies of the British Gazette and the BBC had little impact on the strikers, however. Overall the General Strike was a massive success, but it was lost by the TUC bureaucrats. Somewhere between 1.5M to 2M workers came out on strike out of a total workforce of about 11.8M. ...read more.

The state tried to keep transport moving, with scab buses driven by Oxbridge students or members of the Plus Four Brigade. (Plus Four - Minus Conscience) Buses had to have barbed wire round the engine and a cop riding next to the driver to try to deter attacks. Amateur attempts to run trains caused four deaths and 35 injuries through collisions. Overall it was very important for the government to use propaganda in bringing the strike to an early end because if they hadn't done all of Britain would have suffered due to the General strike. The reason for this is because other workers who didn't work in the mine mill had also joined the miners in the strike so no goods were being produced by Britain for exporting to other countries, which meant Britain was loosing money so the government did what they did because they had to. If they didn't Britain would have suffered greatly. What the government did may not be the right way of dealing with the problem but they had prevent Britain form "dying". Satvir Lyal 11x4 History Coursework: Question 3 08/05/2007 ...read more.