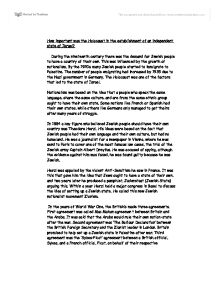 How important was the Holocaust in the establishment of an independent state of Israel?

How important was the Holocaust in the establishment of an independent state of Israel? During the nineteenth century there was the demand for Jewish people to have a country of their own. This was influenced by the growth of nationalism. By the 1920s many Jewish people started to immigrate to Palestine. The number of people emigrating had increased by 1935 due to the n**i government in Germany. The Holocaust was one of the factors that led to the state of Israel. Nationalism was based on the idea that a people who speak the same language, share the same culture, and are from the same ethnic group ought to have their own state. Some nations like French or Spanish had their own states, while others like Germans only managed to get theirs after many years of struggle. In 1884 a key figure who believed Jewish people should have their own country was Theodore Herzl. His ideas were based on the fact that Jewish people had their own language and their own culture, but had no homeland. ...read more.

Britain promised to help set up a Jewish state in Palestine after war. Third agreement was the 'Sykes-Picot' agreement between a British official, Sykes, and a French official, Picot, on behalf of their respective government. According to this agreement Britain and France had to share the entire region between them, with no room for nation-states, Arab or Jewish. Balfour Declaration led hundreds of Jewish people immigration to Palestine after First World War. By the 1920s there were violent clashes between Jews and Arabs. By 1925 there was a peak of immigration. About 40 000 Jews immigrated to Palestine. The policies of Hitler and Stalin also helped to increase the flow of refugees. If the Jews and the Arabs were each to have a nation-state, then the only way was partition Palestine, and through 1930s the British government considered ways of doing that. However the trouble with partition was that almost certain that neither side would accept the new borders, and it made dealing with Jerusalem, the holy city sacred to Jews and Muslims, as well as Christians, so this was a very difficult decision for the British's. ...read more.

Jewish immigration still had to be strictly limited. Britain had used force and barbed wire camps against these illegal immigrants Jews to stop them entering Palestine. Jews also had three main armed groups. They were Haganah, Irgun, and The Stern Gang. 'Haganah' were disciplined and well trained. 'Irgun' were efficient terrorist groups and the most responsible for the spectacular terrorist attacks, and 'The Stern Gang' was an extremist branch of Irgun. These Jewish groups attacked Arabs and British alike, while Arab groups attacked Jewish settlers. In 14th of May 1948 the state of Israel was set up on land partitioned from Arab Palestine, with Chaim Weizmann as its first president. As I'm finishing my coursework, recently the Arab Israeli conflict has erupted again. Nearly three hundred Palestinians are killed. America is trying to settle the conflict between Jews and Palestinians. The president of Palestine Yaser Arafat is desperately trying to become an independent country but it's very difficult for him because Israelis don't want it. Bill Clinton, President of the United States of America is trying very hard to set up a Peace Process to stop the violence and terror between the Jews and the Palestinians. ...read more.