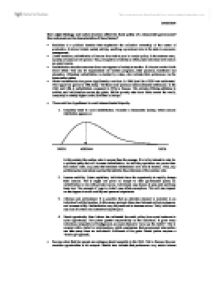 How might ideology and social structure affect the fiscal policy of a democratic government? How universal are the characteristics of these factors?

How might ideology and social structure affect the fiscal policy of a democratic government? How universal are the characteristics of these factors? * Socialism is a political doctrine that emphasises the collective ownership of the means of production. It allows limited market activity, ascribing a prominent role to the state in economic management. * Under socialism, redistribution of income from rich to poor is a major policy. In the extreme case, equality of outcome will prevail. Thus, irrespective of ability or effort, each individual will receive an equal income. * Redistribution transfers resources from one segment of society to another. It is known as the Robin Hood effect. This can be implemented via welfare programs, state pensions, healthcare and education. Ultimately redistribution is decided by voters, who indicate their preferences via the democratic system. * Global redistribution has grown significantly over time. In 1900 just 1% of GDP was reallocated. This figure has grown to 18% today. Yet there exist profound intercontinental differences. In the USA just 14% is redistributed, compared to 22% in Europe. This reflects differing attitudes to welfare and individualism across the globe. ...read more.

Redistribution may be perceived to decrease crime. Thus, individuals may find it in their own interest to help the poor. 4. Equal opportunity. New Labour has redirected its social policy from equal outcome to equal opportunity. This places greater responsibility on the individual. It gives every individual, irrespective of background, an equal chance to 'move up the ladder'. This is coupled with a belief in individualism, which emphasises that government intervention can take away from an individual's fulfilment of his goals. Social justice requires a 'hands off' approach. * Surveys show that few people are unhappy about inequality in the USA. Yet in Europe, the poor consider opportunities to be unequal. Results also indicate that preferences vary across income classes. Whilst, the poorest classes prefer income equality, those with the highest income seem unwilling to share. * It is clear that preferences and social structure differ between continents. In the USA there is a 'pull yourself up by the bootstrap' mentality that reflects the belief in rugged individualism. People fear that welfare encourages dependency on the state. Individuals should fend for themselves. * Similarly, some believe that the prosperous sectors of society should not be forced to share. ...read more.