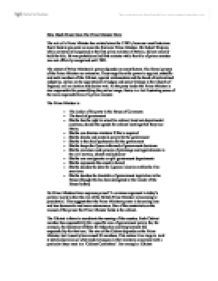 How Much Power Does The Prime Minister Have?

How Much Power Does The Prime Minister Have The role of a Prime Minister has existed since the 1700's, however most historians find it hard to pin point or name the first ever Prime Minister. Sir Robert Walpole, while universally recognized as the first prime minister of Britain, did not actually hold the title. He was probably called first minister while the title of prime minister was not officially recognized until 1905. The extent of Prime Ministerial power depends on many factors. The formal powers of the Prime Minister are extensive. They range from the power to appoint, reshuffle and sack members of the Cabinet, appoint ambassadors and the heads of nationalised industries, advise on the appointment of judges and senior bishops in the Church of England, call an election and declare war. ...read more.

Do Prime Ministers have supreme power? A common argument in today's political world is that the role of the British Prime Minister is becoming to presidential. This suggests that the Prime Ministers power is becoming less and less democratic and more autonomous. One of the constraints on the amount of the power the Prime Minister holds is the cabinet. The Cabinet is there to coordinate the running of the country. Each Cabinet member has responsibility for a specific area of government policy. So, for example, the Secretary of State for Education and Employment has responsibility for that area. The size of the Cabinet depends on the Prime Minister, but it usually has around 20 members. This makes it too large to look at detailed policies so what tends to happen is that ministers concerned with a particular issue meet in a 'Cabinet Committee'. ...read more.