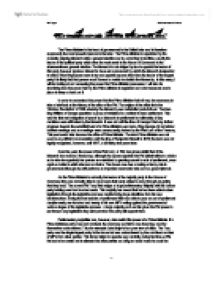 How much power does the Prime Minister really have?

How much power does the Prime Minister really have? The Prime Minister is the head of government in the British Isles and is therefore supposedly the most powerful person in the Isles. The Prime Minister is appointed by the currently reigning Monarch after a general election and is, according to tradition, usually the leader of the political party which wins the most seats in the House of Commons in the aforementioned general election. The Monarch is not obliged by law to appoint the leader of this party however previous Monarchs have set a precedent by which the Monarch is expected to abide. If the King/Queen were to try and appoint anyone other than the leader of the largest party it is likely that that person would forward a motion to abolish the Monarchy. In this essay I will be looking at and assessing the power the Prime Minister possesses. I will also be examining how the power held by the Prime Minister is regulated and what measures are in place to keep a check on it. In order to understand the power that the Prime Minister holds it may be necessary to take a brief look at the history of the office of the PM. The origins of the office lie in the 'Glorious Revolution' of 1688 whereby the Monarchy was reinstalled post-civil war. ...read more.

Benn came up with this theory at a time when many MP's were arguing that the office of Prime Minister was gaining power at the expense of the cabinet. Benn's theory was, however, not an entirely new one; Richard Crossman had come up with a similar idea in his book 'The English Constitution' in 1960. Benn's ten powers were: * The power to appoint. * The power to create peers. * The power to give out honours. * The power to appoint chairs of nationalised industry. * The power to make other appointments (Judicial service, Civil service etc.). * Power over ministerial conduct. * Power relating to government business. i.e. agenda setting. * Power over information. * Power in international relations. * The power to terminate a parliament or government. Benn believed that the ability to 'hire and fire' was the most important of these powers. After the 1997 election in which Tony Blair's Labour Party swept to power with a landslide victory Blair was accused by many commentators of abusing the first of Benn's ten powers. He appointed many acquaintances of his to high ranking positions of power. The tabloid press dubbed them 'Tony's cronies'. In addition to this Crossman argued that there had been two major changes in the machinery of the PM's office. ...read more.

Professor of government and politics at Manchester Metropolitan University Martin Burch came up with a similar thesis in a paper published in 'Transforming British Government Vol. 1' (2000). He claimed there were only three categories of classification: 1. Delegators - Those with a tendency to trust ministers and who interfere minimally. 2. Interveners - Those who Push colleagues towards a certain view. 3. Overseers - Those who adopt a more general overview and seek an overall government objective. In conclusion I believe that it would be fair to say that the power held by the Prime Minister varies considerably depending upon a variety of factors. This is best stated by former PM Sir Richard Wilson: ''The PM's power varies from time to time according to the extent their cabinet colleagues allow them to have that power, depending on whether the cabinet is split, depending upon the strength of the government majority in the house of commons and also upon popular opinion in the electorate and attitudes in the party''. -Sir Richard Wilson In theory the PM is the most powerful person in these Isles; however, there are a number of limiting factors placed upon this power. From the lowliest voter to the highest civil servant to the opposition leader everyone has a certain amount of power with which they can constrain a PM to prevent the establishment of a tyrannous dictatorship or worse. The PM's power is a variable whilst freewill remains a constant. ...read more.