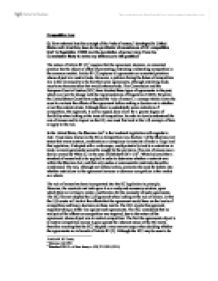 How relevant has the concept of the 'rule of reason,' developed in United States anti- trust law, been to the particular circumstances of EC competition law?

Competition Law Q. How relevant has the concept of the 'rule of reason,' developed in United States anti- trust law, been to the particular circumstances of EC competition law? Is Regulation 1/2003 and the devolution of power away from the Commission likely to make any difference to this position? The nature of Article 81 (1)1 requires that the agreement, decision, or concerted practice has the object or effect of preventing, restricting or distorting competition in the common market. Article 81 (1) captures all agreements or concerted practices whose object is to restrict trade. However, a problem facing the future of competition law in the Community is the fact that some agreements, although restricting trade, may have characteristics that would enhance trade. The Commission and the European Court of Justice (ECJ) have blocked these types of agreements in the past, which is all set for change with the implementation of Regulation 1/2003. However, the United States Courts have adopted the 'rule of reason', a concept which allows the court to evaluate the effects of the agreement before making a decision as to whether or not this restricts trade. Although there is undoubtedly some restriction of competition, this approach, it can be argued, does allow for a greater degree of flexibility when looking at the issue of competition. ...read more.

No such provision exists in U.S law and therefore the court was forced to employ the rule of reason in order to enforce the legislation. Article 81 (3) does have limitations and these limitations are perhaps the reason for the debate surrounding the adoption of the rule of reason in EC law. Article 81 (3) can only be applied by the Commission, not by national courts so the system of application of Article 81 is seemingly at the whim of the commission. Academics such as Korah believe that the Commission is unwilling to move away from the stance taken by the ECJ, and because it grants few exemptions, the idea that national courts follow this approach would mean that their would be little incentive to attempt new ventures, ' If national courts adopt the Commissions practice, it is feared that many desirable contracts which restrict only competition that could not take place without such an agreement, or which restrict competition more than they increase, may not be made.' Only two types of exemption are made under Article 81 (3), individual and block exemptions. However, it must be noted that the precise factors that will lead the Commission to exempt an agreement will differ from case to case. ...read more.

the courts to have no place in EC law, we can clearly see that its principles are needed in order for Community competition to advance and evolve. The restrictions that dominated procedures for all Article 81 cases are slowly being stripped away. The implementation of Regualtion 1/2003 and the devolution of power away from the Commission means we have a more representative system of legislation. The ECJ, although not a legislative body, has the power to influence any future Commission decision through the verdicts it delivers. By now implementing a system in which the ECJ is encouraged to evaluate the legislation on a much broader level, this could introduce a system where the system of Competition develops as a response to the requirement of the Community at the time, a decision based on the spirit and needs of the Community. Word Count: 2169 1Article 81 EC Treaty 2 Sherman Act 1890 3 Standard Oil Co. of New Jersey v. US, 221 US 1 (1911) 4 Constan and Grundig v. Commission (Cases 56 & 58/64) 5Societe La Technique Miniere v. Maschinenbau Ulm,(LTM) 1966 ECR 235 6 Case T-65/98 R Van den Bergh Foods v Commission [1998] ECR II-2641 7 EC Treaty 8 Re Bayer and Gist-Brocades [1976] 1 CMLR D98 9 LC Nungesser KG & Kurt Eisle v Commission of the European Communities : ECJ Case C-258/78 ...read more.