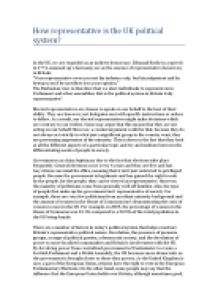 How representative is the UK political system?

﻿How representative is the UK political system? ________________ In the UK, we are regarded as an indirect democracy. Edmund Burke in a speech in 1774, summed up what many see as the essence of representative democracy in Britain: ?Your representative owes you not his industry only, but his judgement and he betrays you if he sacrifices it to your opinion.? The Burkesian view is therefore that we elect individuals to represent us in Parliament and other assemblies. But is the political system in Britain truly representative? Elected representatives are chosen to speak on our behalf to the best of their ability. They are however, not delegates sent with specific instructions or orders to follow. As a result, our elected representatives might make decisions which are contrary to our wishes. Some may argue that this means that they are not acting on our behalf. However, a counterargument could be that, because they do not always act strictly to what just a significant group in the country want, they are preventing oppression of the minority. ...read more.

There are a number of factors in today?s political system that helps construct Britain?s representative political nature. Devolution, the presence of pressure groups, a range of political parties, a democratic society, and the devolution of power to more localized communities and Britain?s involvement with the EU. By devolving power from centralized government in Westminster to create a Scottish Parliament and a Welsh Assembly, the UK becomes more democratic as the government is brought closer to those they govern. As the United Kingdom is now a part of the European Union, citizens have the right to vote in the European Parliamentary Elections. On the other hand, some people may say that the influence that the European Union holds over Britain, although sometimes good, e.g. Britain being obliged to conform to the Human Rights ideas of the EU, it can be viewed as overwhelming. The government is accountable to citizens, and to Parliament. They are bound by law. This helps to prevent general tyranny and corruption within a political party. ...read more.

On the contrary, the public may find the government excessively secret about issues that could have a great impact on their lives. For example, the decision for Britain to back the U.S in their invasion in Iraq was, to many people, unexpected. Numerous citizens thought that a referendum should have been called before such a decision. Hence, it could be said that tool of direct democracy could help strengthen our representative democracy as it helps to refresh the mandate several years into a Parliament when momentum may have changed. In conclusion, I believe that the UK political system is fairly representative. On the whole, the structure of our government is very supportive of good representation. However, I also believe that it will also be hard for MPs to juggle what everyone in our community wants, making some decisions look unrepresentative. Also, there are some technicalities which could lead to the questioning of whether the UK is truly represented. Personally, I believe that the moderate majority are represented, but the fact is that people can only judge how representative the system is by analysing it from their own viewpoint. ...read more.