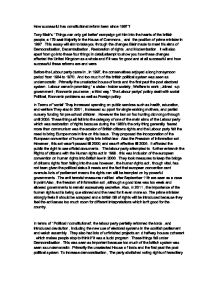 How successful has constitutional reform been since 1997 ?

How successful has constitutional reform been since 1997 ? Tony Blair's ' Things can only get better' campaign got him into the hearts of the british people, a 179 seat Majority in the House of Commons , and the position of prime minister in 1997 . This essay will aim to take you through the changes Blair made to meet his aims of Democratization, Decentralization , Restoration of rights , and Modernization . It will also apart from go into these four things in detail,attempt to show you how these changes affected the United Kingdom as a whole and if it was for good and at all successful and how successful these reforms are and were. Before the Labour party came in , in 1997, the conservatives enjoyed a long honeymoon period from 1964 to 1970 . And too much of the british political system was seen as undemocratic . Primarily the unselected house of lords and the first past the post electoral system . Labour came in promising ' a stake- holder society ; Welfare to work ; Joined -up government ; Economic prudence ; a third way.' The Labour partys' policy dealt with social Political, Economic problems as well as Foreign policy. ...read more.

In terms of ' Political / constitutional', the labour party partially reformed the lords , and introduced devolution , including the new use of electoral systems in the scottish parliament and welsh assembly . They also had lots of unfinished projects and halfway houses coherent . which makes people stop to think if it was a lucid program . These things fall under Democratisation . This was seen as important because too much of the british system was seen as undemocratic . Primarily the unselected House of lords and the first past the post political system. To increase democratisation , The party abolished voting rights of hereditary peers in the House of lords. Also, Proportional representation was introduced in electoral system for the scottish parliament , welsh and northern ireland assemblies , election to european parliament for the greater london assembly and elected mayors. They also introduced referendums which introduced the principle that any proposal to transfer power within the uk should be approved by a referendum . it also introduced the cabinet system in local government and opportunity for local people to introduce elected mayors by referendum.A new electoral commision was set up to regulate elctions and referendums , including funding of parties. ...read more.

The introduction of Proportional representation to be approved by referendum failed to be passed, as well as the introduction of a fully elected house of lords . However it was not all lemons , and all their efforts were not in vain, The introduction of fixed term parliaments and taking away the pm's power to dissolve parliament and call a general election every 5 year term. Another thing which added grease the their elbows was the local constituents have the power to recall an mp who proves to be corrupt . and greater powers were granted to the scottish parliament and welsh assembly .However some things took almost as long as they took to get into power to pass . things such as reduction of the house of commons by 10 per cent and equalisation of constituencies which is just happening in 2011 , and there has only been some progress with compulsory regulation of pressure groups to regulate their operation in parliament. In my opinion , the Labour reforms were successful to an extent but the cons outweigh the pros so the labour reforms were successful to an extent, but not to the extent that they made a significant change and they also took too long to be passed and when they were eventually implemented they were very rarely worth the wait, so the Labour reforms were not very successful in my opinion. Munoyo Ikomi L6cv ...read more.

3 stars - The strength of this essay is that it follows the conventions and structure of a good essay effectively. The essay also demonstrates good knowledge of reforms post 1997, and deploys that knowledge through clearly explained, relevant examples.
Where this essay could be improved is by being more focused on the question - the focus is CONSTITUTIONAL reform - the essay is very general and therefore includes some material that is not necessary to answer the question.
The essay would also benefit from thorough proof reading - capital letters are used inaccurately and inconsistently, and in places sentences do not make complete sense.