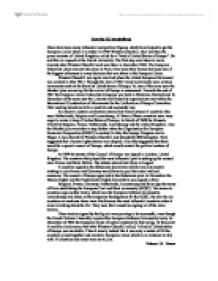 How the EU was built up.

How the EU was built up There have been many influential and political figures, which have helped to get the European Union where it is today. In 1946 Winston Churchill, who was then the prime minister of United Kingdom, called for a "kind of United States of Europe". He said this in a speech at the Zurich University. The first step ever taken to move towards what Winston Churchill said was taken in December 1946. The European Federalist Union was set into place in Paris. Ever since than France has been one of the biggest influences to every decision that was taken in the European Union. Winston Churchill was again involved when the United European Movement was created in May 1947. ...read more.

In January a custom convention entered into force between 3 countries who were Netherlands, Belgium and Luxembourg. All three of these countries were very eager to create a king of United States of Europe. In March of 1948 the Brussels Treaty by Belgium, France, Netherlands, Luxembourg and the United Kingdom. Also the Marshal plan was taken a step further when the Organisation for European Economic Cooperation (OEEC) is created. In May the Europe Congress met in Hague, it was chaired by Winston Churchill and attended by 800 delegates. They suggested that a human rights charter was adopted. Also they suggested that there would be a special council of Europe, which would control the political matters of Europe. In 1949 the statute of the Council of Europe was signed in London, United Kingdom. ...read more.

The same six countries sign another treaty, which was the European Defence Community. Luxembourg was chose as the temporary headquarters for the ECSC. By now the six countries as mentions above were fast become the most influential countries when it came to talking about the EU. They were the 6 countries signing all of the main treaties. There treaties signed by the big six were proving to be successful, even though the French National Assembly rejected the European Defence Community treaty. In December of 1954 the European Court of Justice rendered its first ruling. At this point it could be clearly seen, that what Winston Churchill called, "a kind of United states of Europe was inevitable. Then it clearly looked like it was only a matter of till the countries joined together and created a European Union which is in existence to day with 15 countries and many more set to join. Dabeer Ul - Hasan ...read more.