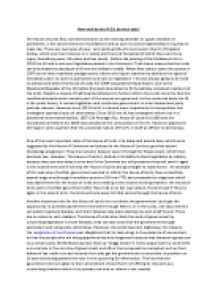 How well do the House of Lords do their jobs?

Transfer-Encoding: chunked ﻿How well do the H.O.L do their jobs? The House of Lords (HL), sometimes known as the revising chamber or upper chamber of parliament, is the second element of parliament and as such its consent (generally) is required to make law. There are two types of peer, Lord spiritual (the 26 most senior Church of England bishop, which now has 2 women in is ranks) and the Lord Temporal (of which there are three types; hereditary peers, life peers and law Lords). Before the passing of the Parliament Act in 1911 the Hl held a veto over legislation passed in the Commons. That statue means that the Lords can only delay the passing of a bill and not defeat it totally. When New Labour came into power in 1997 one of their manifesto pledges was to reform the Upper chamber by abolition the rights of hereditary peers to come to parliament and vote on legislation. This was always going to be hard to achieve and when the House of Lords Act 1999 was granted Royal Assent, due to the Weatherall (Speaker of the HC before Bercow) ...read more.

They then amend, delay or pass it through for Royal assent, which then becomes law. However, The House of Lords is limited in its ability to block legislation by statute, because they can only delay it once and if the Commons are still persistent they will send it again in the second term and it will skip the House of Lords and go straight to royal Assent. An example of this was when the Blair government wanted to reform the house of lords; they successfully passed stage one (brought hereditary peers to 92 from 777) and proceeded to stage two which was abolishment for the house of lords and creating a new second revising chamber, the House of lords said to the Blair government after they tried once but was vetoed, the lords said if they try again in the second term, the lords will veto every bill that comes through the house of lords. Another important role for the House of Lords is to scrutinise the government Lords get the opportunity to question government ministers through letters, or in the Lords, one day a week is set aside for general debates and short debates take place (lasting one and a half hours). ...read more.

The presence of 26 Church of England bishops seems strange in the 21st century but with the plethora of faith groups in the UK it could be argued that other religions be represented in Parliament or whether there is indeed any need for Lords Spiritual at all. The presence of 92 hereditary peers is also rare in Western democracies but perhaps it is these anachronisms that makes the HL ?work?. In the last Parliament it was very rigorous in its scrutiny knowing that the government's mandate was limited and so Salisbury applied to nothing! That is why some say "if it ain't broke don't fix it" but to come to a conclusion it is clear that the HL is in more need of reform than the HC. UK'S democratic credentials are seriously undermined by having an unelected second chamber. In USA Senate and House of Representatives are equal and although that has problems there is at least democratic legitimacy. To conclude, there is little appetite for the much needed reform of the HL due to there being no consensus as to what the role and composition of any second chamber should be. Uni- cameral parliament has been suggested by Luton North MP, Kelvin Hopkins (Labour) ...read more.