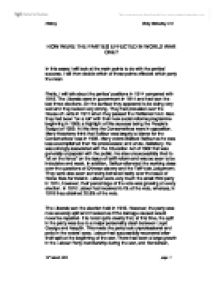 How were the parties effected in world war one?

HOW WERE THE PARTIES EFFECTED IN WORLD WAR ONE? In this essay I will look at the main points to do with the parties' success. I will then decide which of these points effected which party the most. Firstly, I will talk about the parties' positions in 1914 compared with 1918. The Liberals were in government in 1914 and had won the last three elections. On the surface they appeared to be doing very well and they looked very strong. They had prevailed over the House of Lords in 1911 when they passed the Parliament Act. Also they had been "on a roll" with their new social reforms programme beginning in 1906, a highlight of this success being the People's Budget of 1909. At this time the Conservatives were in opposition. Many historians think that Balfour was largely to blame for the Conservatives' loss in 1906. Many voters disliked Balfour as he was less accomplished than his predecessor, and uncle, Salisbury. He was strongly associated with the Education Act of 1902 that was generally unpopular with the public. ...read more.

Also, after 1918 they were the major party in the post-war coalition. One of the major effects of the war was party division. Before the war the Liberals were doing very well. They had held together well during the House of Lords crisis, and Asquith had a period of 6 years in government with practically no resignations. However, in 1916 they encountered a huge split where their two leaders became enemies. This rift carried on in 1918 during the Maurice Debate and Coupon Election and there was no sign of the split healing. The Conservatives experienced no splits during the war and they remained strong and united. Labour endured a small split at the beginning of the war between the patriots and the pacifists, like MacDonald. This was not severely damaging as, before the war had ended, Labour left the coalition and re-joined. Their split was seen to be much more professional than the Liberals' personal squabbles. The war also affected the leadership of the parties during the war. After working well together during the period of 1908-14, there was an extremely damaging and lengthy leadership battle between Asquith and Lloyd George in 1916. ...read more.

Before the war the Liberals had new ideas of social reform. They had lots of drive to achieve their new ideals that came under the heading of "New Liberalism". After the war, their split meant that the party were no longer united on any points and all of their previous impetus was lost. The Conservatives ideas had not changed during the war. Their views were clearly suited to war, as they were nationalistic and disciplined. Labour left the war coalition early to prepare them for peacetime and to organise their new constitution. The Labour 1918 Constitution, including Clause Four, contained all of their new ideas and stated that they were both a Trade Union and a Socialist party. In conclusion, I would say the most important effect of the war was the Liberal split. This was one of the major causes of the Liberals' downfall and it allowed Labour to become the United Kingdom's second largest party. Also, the Liberals had big problems with the new "class cleavage" that arose after the war. War was a major turning point in all of the parties' functions. History Vicky Maberley LVI 14th March 2003 page 1 ...read more.