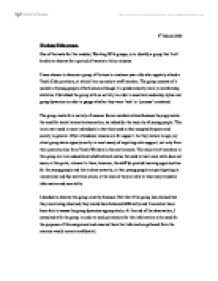 I have chosen to observe a group of thirteen to nineteen-year olds who regularly attend a Youth Club provision, at which I am currently a staff member. The group consists of a number of young people of both sexes

3rd March 2005 Working With groups. One of the tasks for this module, Working With groups, is to identify a group that I will be able to observe for a period of twenty to thirty minutes. I have chosen to observe a group of thirteen to nineteen-year olds who regularly attend a Youth Club provision, at which I am currently a staff member. The group consists of a number of young people of both sexes although it is predominantly male in membership statistics. I furnished the group with an activity in order to ascertain leadership styles and group dynamics in order to gauge whether they were 'task' or 'process' orientated. The group meets for a variety of reasons. Some members attend because they appreciate the need for social interaction/recreation, as indeed do the majority of young people. This is an overt need in most individuals in that they need to feel accepted by peers and society in general. Other attendance reasons are for support. As they mature in age, my client group show signs (covertly in most cases) of requiring extra support, not only from their peers but also from Youth Workers in the environment. ...read more.

to take the lead. This member thought that the best and most logical way to decide on the leader for the task was to nominate a less prolific member in order to allow this person to be part of what was going on. D.L. is a fairly introvert personality who prefers to remain in the background and yet was given the impetus to become a more proactive member. I viewed this event as 'subconscious empowerment' on the part of the other group members. Once all roles had been established, members settled down to discuss the correct way in which to deal with the given task, at which point, I became aware that some members were even getting complacent in their attitudes. Tuckman refers to the 'Forming' stage as a comfortable stage and states that due to the comfort factor and the lack of challenging/threatening behaviour, very little in the way of task, gets done. Storming: The majority of the group, at this stage, appeared 'task orientated' and were keen to start the project. Some members, R.F. and S.R. were happier to sit back and allow the others to proceed with the task. ...read more.

Group member No. of contributions + total No. of contributions - total CH ******** 8 *** 3 DL ***** 5 ** 2 AN *** 3 * 1 BB ** 2 *** 3 SR ** 2 *** 3 RF * 1 * 1 WF 0 0 CD *** 3 0 JK **** 4 0 Summary: Tuckman's theory of Storming, Forming, Norming and Performing, proved to be an excellent theory for me with which to measure the successes of group dynamics. This group went quickly from stage one to stage two and then took a little longer to reach stage three. On a few occasions, some group members reverted back to stage one but stronger members quickly gave ample support to those people in order to get the team back to the same stage. I enjoyed this observation very much as it allowed me to gain a deeper insight into the personalities of the young people in my charge in a way that, ordinarily, during other recreational activities, I would not have been privy to. The ground rules laid down by the group as a whole had been adhered to and even when broken were done so with sensitivity and thought for others. ...read more.