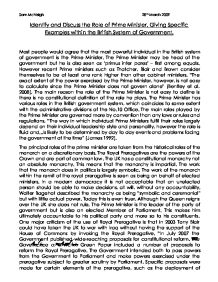 Identify and Discuss the Role of Prime Minister, Giving Specific Examples within the British System of Government.

Identify and Discuss the Role of Prime Minister, Giving Specific Examples within the British System of Government.

The principal roles of the prime minister are taken from the historical roles of the monarch on a discretionary basis. The Royal Prerogatives are the powers of the Crown and are part of common law. The UK has a constitutional monarchy not an absolute monarchy. This means that the monarchy is impartial. The work that the monarch does in politics is largely symbolic. The work of the monarch within the remit of the royal prerogative is seen as being on behalf of elected ministers. In a modern democracy it is not acceptable that an unelected person should be able to make decisions, at will, without any accountability. Walter Bagehot described the monarchy as being “symbolic and ceremonial” but with little actual power. Today this is even truer. Although the Queen reigns over the UK she does not rule. The Prime Minister is the leader of the party of government but is also an elected Member of Parliament. This makes him ultimately accountable to his political party and more so to his constituents. One major criticism of the use of Royal Prerogative is that in 2003 Tony Blair could have taken the UK to war with Iraq without having the support of the House of Commons by invoking the Royal Prerogative. “In July 2007 the Government published wide-reaching proposals for constitutional reform. The Governance of Britain Green Paper included a number of proposals to reform the Royal Prerogative. The Government intended both to pass powers from the Government to Parliament and make powers exercised under the prerogative subject to greater scrutiny by Parliament. Specific proposals were made for certain elements of the prerogative, such as the deployment of Armed Forces overseas and placing the civil service on a statutory basis. The Government also set out its intentions to conduct a wider review of prerogative powers” (UK Parliament 2008).

The roles of the Prime Minister can be divided into roles as head of state and roles as head of the government. As head of state, the Prime Minister is in control of the British Armed Forces, as the monarch used to be, but does not actually lead the forces into battle. He ultimately directs the armed forces in their execution of their duty, both domestically and abroad, with the help of the military commanders. He also oversees military intelligence both at home (MI5) and abroad (MI6). Another role as head of state is as a negotiator of foreign treaties. This role is exactly as the title would suggest. Since the 1970’s prime ministers have been involved in increasing amounts of travel and meetings with foreign heads of government. There are several engagements per year (the G7, UN and up to four European Councils) and several less frequent regular events such as the biannual Commonwealth Heads of Government Meeting as well as other less structured summits, most frequently with Ireland and the USA. He also meets with other head of states as meetings are required. An example of this would be the current G20 summit to decide how best to deal with the current economic climate.

As head of state he is also the head of the Executive. The Prime Minister is in charge of overseeing the civil services and government agencies, and is ultimately answerable for all its decisions. Although this may seem like a fairly big task in its own right; however, he is assisted in this particular role by the cabinet and his private office. Another role of the Prime Minister as head of state is that he has the final say in the granting of honours the Prime Minister can nominate individuals himself for Peerages (Life Peers), Knighthoods and other lesser honours. However, recently Prime Minister Blair came under criticism, and suspicion, in the cash for honours investigation to see if his appointment of peers had been influenced by party donations. No charges were brought. Finally as head of state the Prime Minister has the final say in the appointment of Archbishops and Bishops of the Church of England and also senior Judges. These are nominated by the Archbishop of Canterbury and the Lord Chancellor.

There have in recent years been many discussions about the way in which individual Prime Ministers have carried out their roles. “The formal roles of Prime Minister are necessary but not a sufficient condition for the effective use of Prime Ministerial Power. Other variables come into play such as political circumstances of the time and the relationship with his Cabinet Ministers...” (Norton 1987). In 1979 The UK elected its first (and only) female Prime Minister. “Margaret Thatcher proved to be the most dominant peacetime Prime Minister of the last century” (Jones et al, 2007). Her leadership was very much that of a women who did things her way. Many of the policies that emerged during her premiership were identified as hers not as policies of the conservative party. Some academics have even ventured as far as to say that the role of British Prime Minister has become more presidential. This idea emerged in the 1980’s during Thatcher’s premiership “It is hardly exaggerating to describe Thatcher’s Premiership as not merely presidential but quasi-monarchical” (Johnson 1990). This domination of her government renewed the debate of Prime Minister and Cabinet power. “In order to maximise the point of executive centralism, references were often made to the comparability of the British Prime Minister and the American Presidency” (Foley, 1994).  During an interview Mrs Thatcher stated that “I am not a consensus politician. I believe in the politics of persuasion: it is my job to put forward what I believe and try to get other people to agree with me” (Observer 25th February 1979).  Some arguments against the Prime Minister/President debate include “practical restrictions on the Prime Minister’s power to hire and fire ministers constraints are in place on the capacity of the Prime Minister to control government business” (Burch 1990), The Prime Minister has a very powerful position , but only whilst in favour of their cabinet colleagues (Jones 1990). On 22nd November 1990 Mrs Thatcher stood down as Prime Minister after losing the support of her cabinet colleagues. The Prime Minister said pressure from colleagues had forced her to conclude that party unity and the prospect of victory in the next general election would be better served if she stepped down. However, the conservative party chairman said “Once again Margaret Thatcher has put her country's and party's interests before personal considerations”.  After the next round of leadership elections John Major became the Prime Minister.

John Major Premiership was the opposite of Mrs Thatcher, especially in his dealings with cabinet colleagues. His leadership style was definitely consensus based consulting and welcoming advice from respective heads of departments. He gave each of the cabinet members the autonomy to make their own decisions. At the start of his premiership he was “stuck” with the policies of Mrs Thatcher and although he could have implemented change he stayed with the manifesto that won the election. This style of leadership is completely the opposite of a President who takes advice from his cabinet, but then ultimately makes the decision for himself. John Major gave the impression of a weak leader for the conservatives and Margaret Thatcher and her supporters felt she had been stabbed in the back. At the end of his premiership in 1997 there were many different problems that weakened his premiership. The humiliation of “Black Wednesday” as the UK left the ERM, increased taxes after a pledge to cut them and growing turmoil in Europe.

In May 1997 Tony Blair and New Labour were elected into government. Tony Blair “strengthened the Prime Minister’s office to a Greater degree than any of his Predecessors” (Jones et al 2007). By 2001 he had made more changes than his predecessors over the last 50 years combined. He had many meetings with aides on the sofa of No10 without senior cabinet members being present. It was noted “the absence of minutes for many meetings. The Blair approach suffered from reasoned deliberation and too much central control” (Jones et al 2007). Like a president, Tony Blair, became the communicator in chief of the government. Even before Blair was elected Michael Foley noted the rise of the British Presidency (Foley 1993). In Blair’s second term he agreed to hand over the reins of power to Gordon Brown. These broken promises were destabilising for the Blair government. Peter Hennessey dubbed Blair’s premiership as a “Command Premiership”

In conclusion the roles of the Prime Minister do appear to be fluid and as the evidence would suggest, these roles vary a great deal from premiership to premiership. Some academics would suggest that the role of Prime Minister is heading towards the style of a President especially when looking at the Prime Ministers that have been in power since 1979. The party leader would take a very much command role with all decisions having to be ratified by the Prime Minister and all decisions being his and his alone. This has become more evident since Gordon Brown took over as Prime Minister. Brown is considered by most of his staff to be a micro manager, wanting to know about every minute decision they want to make. He has been noted as having temper tantrums when he feels “left out of the loop”. One advantage of having a presidential style of Premiership could be that there would be a definite set of roles that the party leader would have. This would be of benefit to all and would make scrutiny of the Prime Minister easier.