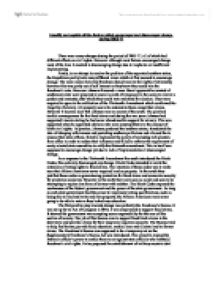 Identify and explain all the factors which encouraged and discouraged change during 1863-77 There were many changes during the period of 1863-77, all of which had different effects on civil rights. However although most factors encouraged change most of the time it resulted in discouraging change due to loopholes or insufficient implementing. Firstly, in an attempt to resolve the problem of the separated southern states, the Republican partly took many different views which at first seemed to encourage change. The more radical believed freedmen should receive full rights of citizenship however this was partly out of self interest as they knew they could win the freedmen's vote. However Johnson favoured a more liberal approach he wanted all southerners who were prepared to swear an oath of allegiance to the union to receive a pardon and amnesty; after which they could vote and stand for election. They were required to agree to the ratification of the Thirteenth Amendment which confirmed the illegality of slavery. All property was to be restored to them except their slaves. However it became clear that Johnson was no enemy of the south. The plan had terrible consequences for the freed slaves and during the war years Johnson had supported Lincoln stating he had never abandoned his support for slavery. ...read more.

The Bureau tried to help find homes, provide food, education, medical care and allocate land to former slaves. The Freedmen's Bureau was supposed to be a temporary act so the Supplementary Freedmen's Bureau Act was introduced. This aimed to expand the Bureau's officer's power to enable them to act against state officials who withheld freedmen's civil rights. It also proposed the establishment of military courts to deal with labour disputes between former slaves and their new employers and to protect them form the Black Codes that forced labour contracts. The Civil Rights Act (1866) was a factor which encouraged change. It was the first attempt to define national citizenship in law; it intended to establish the equality of African Americans. It defined all persons born in the USA, except for Native Americans, as citizens. It guaranteed equal rights in terms of justice without prejudice; however it left out the issue of voting. This act applied to the North and South and it changed the relationship between the federal government and state governments. The state governments were responsible for its enforcement; the federal government had to enforce its terms. Johnson tried to discourage this change with a veto and saying they contravened the principles laid down in the Constitution, threatened the rights of other citizens and was a misuse of federal power. ...read more.

These conventions removed barriers to voting or holding office, and the extension of the vote to all male citizens benefited the poor white people as well as freedmen. These acts encouraged change also. The Fifteenth Amendment was supposed to encourage change by prohibiting the denial of suffrage, because of race, colour or previous conditions of servitude. However in order to pacify the northern states the Fifteenth Amendment allowed states to impose their own voting qualifications, which discouraged change as the southern states could yet again exclude African Americans from voting. The Civil Rights Act of 1875 aimed to prohibit segregation in public places which was encouraging change. Although by this time the Republicans were losing support and this was reflected in them removing a clause relating to mixed schooling in order to ensure the passage of the bill into law. The impetus for implementing is provisions rested with the persecuted whom had to take responsibility for making complaints under the terms of the law, however few were brave enough. To conclude, Johnson was the key person who more than anything used the law to discourage change, which reflected his racist attitude. However when the Republican party came to power they introduced Acts which were designed to encourage change although due to the Constitution or state governments, their altruistic plans were not always successful in encouraging change. ...read more.