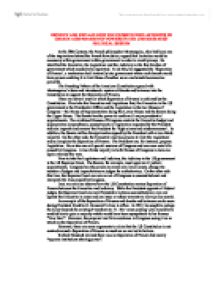 Identify and explain how the constitution attempts to create a separation of powers in the United States' political system.

IDENTIFY AND EXPLAIN HOW THE CONSTITUTION ATTEMPTS TO CREATE A SEPARATION OF POWERS IN THE UNITED STATES' POLITICAL SYSTEM In the 18th Century, the French philosopher Montesquieu, who had been one of the inspirations behind the French Revolution, argued that limitation would be necessary within government within government in order to avoid tyranny. He identified the Executive, the Legislature and the Judiciary as the four braches of government which needed to be separated. To do this, he suggested the 'Separation of Powers', a mechanism built internally into government where each branch would have powers enabling it to limit those of another so no one branch becomes too powerful. The Founding Fathers of the American Constitution agreed with Montesquieu's ideas and introduced a system of checks and balances into the Constitution to support the Separation of Powers. There are several ways in which Separation of Powers is achieved by the Constitution. ...read more.

A two-thirds majority in both Houses of Congress in turn can again override this veto. Now to take the Legislature and Judiciary, the Judiciary in the US government is the US Supreme Court. The Senate, for example, must approve all judicial appointments. Congress has the powers to create new lower courts, change the number of judges and impeach/remove judges for misbehaviour. On the other side this time, the Supreme Court can rule an act of Congress as unconstitutional and interprets the laws passed by Congress. Last, we can also observe how the US Constitution creates Separation of Powers between the Executive and Judiciary. While the President appoints all federal judges, the Supreme Court can rule Presidential actions unconstitutional, can rule against the Executive in cases and can issue or refuse warrants to allow police search. ...read more.

Some since have argued that the 'checks and balances' should be reviewed because they may not provide satisfactory Separation of Powers. The system of checks and balances have also been under heat for not providing satisfactory Separation of Powers because some have observed how since the 19th Century right up to the modern day, the presidential authority seems to dominate in government. They observe how President Thomas Jefferson in 1803 authorised the 'Louisiana Purchase' without the consult of Congress. This more than doubled the size of the US and used up funds in the US budget therefore Congress is shown as weak for not forcing itself to take part in this crucial decision. Another example can be seen where President Abraham Lincoln ordered the blockade of southern ports and increased the number enlisted in the army again without Congressional authorisation during the Civil War. By the 1960's too, during the Vietnam War, the Presidents had undoubted primacy/hegemony in the handling of defense policy ...read more.