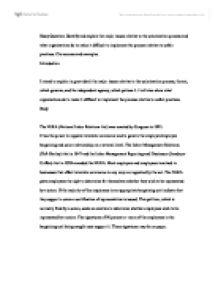 Identify and explain the major issues relative to the unionization process and what organizations do to make it difficult to implement the process relative to unfair practices. Cite sources and examples.

with a labor organization (not established, maintained, or assisted by any action defined in section 8(a)of this Act [in this subsection] as an unfair labor practice) to require as a condition of employment membership therein on or after the thirtieth day following the beginning of such employment or the effective date of such agreement, whichever is the later, if such labor organization is the representative of the employees as provided in section 9(a) [section159(a) of this title], in the appropriate collective-bargaining unit covered held as provided in section 9(e) [section 159(e) of this title] within one year preceding the effective date of such agreement, the Board shall have certified that at least a majority of the employees eligible to vote in such election have voted to rescind the authority of such labor organization to make such an agreement: Provided further, That no employer shall justify any discrimination against an employee for non-membership in a labor organization (A) if he has reasonable grounds for believing that such membership was not available to the employee on the same terms and conditions generally applicable to other members, or (B) if he has reasonable grounds for believing that membership was denied or terminated for reasons other than the failure of the employee to tender the periodic dues and the initiation fees uniformly required as a condition of acquiring or retaining membership;(4) ...read more.

The goal that night, a Vance employee told a reporter, was "to hurt people." Detroit police watched the Vance riot, but no arrests were made. Conclusion I feel once again that I have thoroughly covered the questions given. I put quite a bit of time into researching each part of the question. I was appalled at a lot of the information that I read, especially at Caterpillar and in Detroit. The examples I chose were the best out of many, which I had found. I really got into this essay and I hope you enjoy reading it as much as I did writing it. (Seriously) Sources Patrick J. Cihon, James Ottavio Castagnera, Employment and Labor Law, Third Edition(West Educational Publishing Company, 1999) Chapters 14 and 15. Chromer, Robert. "Union Busters." Industrial Worker Magazine Feb. 1996, Industrial Worker Magazine Online. Online. Levine, Daniel, " A l**t to Bust." Disgruntled Magazine 7 Sept. 1997," Disgruntled Magazine Online. Online, (Counterpoint Publishing Inc. 1997) Kate Bronfrenbrenner, Cornell University and Paul Weiler, Harvard University; "Commission on the Future or Worker Management Relations." AFL-CIO Homepage Online. Online. 1999 IBEW Local 58 Homepage, " National Labor Relations Board." Online, 1999 Hunter, Robert, " Can the big labor movement survive." July 1997 Michigan Chamber of Commerce. Michigan Forward, Online, 1997 Wade, Russell, " Stalog Caterpillar "96"." Solidarity Magazine July 1996, Solidarity Magazine Online, Online, 1999 ...read more.