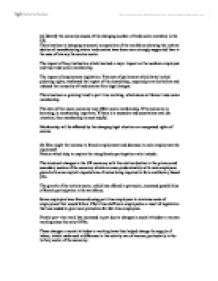 Identify the economy causes of the changing number of trade union members in the UK.

(a) Identify the economy causes of the changing number of trade union members in the UK. There has been a changing structural composition of the workforce showing the relative decline of manufacturing where trade unions have been more strongly supported than in the case of lets say the service sector. The impact of the privatisation which has had a major impact on the numbers employed and thus trade union membership. The impact of employment legislation. Five acts of parliament which have limited picketing rights, weakened the impact of the closed shop, required pre-strike ballots and reduced the immunity of trade unions from legal charges. There has been a growing trend to part-time working, which does not favour trade union membership The state of the macro economy may effect union membership. If the economy is booming, is membership important. If there is a recession and uncertainty over job retention, then membership is seen helpful. Membership will be affected by the changing legal situation on recognised rights of unions. (b) How might the increase in female employment and decrease in male employment be explained? ...read more.

As regards the decline in male employment levels since 1972 (about three million less be 1996): * The process of deindustrialisation, which has seen the relative decline of the manufacturing sector, which therefore had been a major sources of male employment. Relative contributory factors include competition from overseas sources of supply and the favourable impact of a high exchange rate at various times since 1972. * The decline in the size of the coal industry in recent years. (c) Critically examine the factors, which might explain the differences in women's and men's average earnings. The chart shows that women's average earnings as a percentage of men's earnings vary between about 50% (Netherlands, Switzerland and the UK) and 70% or more (such as in Italy, Denmark and France). The text makes clear that this s*x differential is not explained by the comparison of part-time earnings by females with those of men but relates to full-time working. Women are more likely than men to move in and out of the labour force, with many taking a particularly long breaks in their career to raise children. ...read more.

Perhaps the most significant impact of EU labour market legislation on the UK is that following the change of government in 1997, the UK signed the European Union's 'Social Chapter' of the Maastricht Treaty. This covers rights to: * Equal treatment of men and women * Improvements in living conditions and working conditions * Freedom of movement * Social protection * Fair remuneration in employment * Vocational training * Health protection and safety at the work place * Freedom of association and collective bargaining. Many of these rights are uncontroversial, although others might be taken to be a treat to the labour market flexibility by imposing unnecessary costs on employers. This was the reason why the UK refused to sign the chapter in the first place, leading top accusations that the UK was gaining unfair competitive edge over rival member states. This is sometimes called 'social dumping'. The UK has passed much labour market legislation, which is in line with the spirit of the social chapter. Before the time of signing, for example, it had already been established as a legal principle that work of equal worth should receive equal pay. This can be seen as important in ensuring equal treatment for men and women. ...read more.