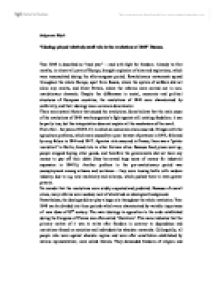 Malgorzata Wojcik "Ideology played relatively small role in the revolutions of 1848" Discuss. Year 1848 is described as "mad year" - mad with fight for freedom. Already its first months, in almost all parts of Europe, brought explosion of aims and aspirations, which were accumulated during the after-congress period. Revolutionary movements spread throughout the whole Europe, apart from Russia, where the system of serfdom did not allow any revolts, and Great Britain, where the reforms were carried out in non-revolutionary channels. Despite the differences in social, economic and political structures of European countries, the revolutions of 1848 were characterised by uniformity, and their ideology was a common denominator. There were several factors that caused the revolutions. Some believe that the main cause of the revolutions of 1848 was bourgeoisie's fight against still existing feudalism. it can be partly true, but this interpretation does not explain all the mechanism of the revolt. First of all - the years of 1845-47, in which an economic crisis occurred. It began with the agriculture problems, which were caused by a poor harvest of potatoes in 1845, followed by crop failure in 1846 and 1847. Agrarian riots occurred in France, there was a "potato revolution" in Berlin, bread-riots in other German cities. Because food prices went up, people stopped buying other goods, and therefore the governments did not have any money to pay off their debts (they borrowed large sums of money for industrial expansion in 1840's). ...read more.

The second part of the revolutions 1848, in which ideology was becoming less and less important, began as the aim of it was partly achived. In most revolutionary countries the constitution was promised, the structure of power and system was on the right way to change. One could say that the revolution was 100% successful. However, change from absolute to constitutional monarchy did not mean that the overall quality of life would improve. So when people did nit get what they expected (especially peasants and artisans), they started to care only about their own interests, forgetting about their primary, noble goal. A great example of it is when the enterprises of the II Republic of France required money, and peasants did not want to pay taxes. Louis Blanc announced nationalization of banks and tax progression, which feared the bourgeoisie. Liberals and radicals decided to organize a demonstration against the Assembly, which led to prohibition of organising gatherings and establishing new clubs. The leaders of the demonstration were also arrested. The decision concerning the national workshops was much more difficult, but as it was no solution to the unemployment, the Assembly decided to close it. As a result, there was an insurrection in Paris (the famous June Days). there were a lot of killed and arrested - the social revolution not only failed, but also led to restriction of benefits of the political revolution. ...read more.

The Frankfurt parliament did not have the future. To sum up, I cannot agree that the ideology of revolutions 1848 played a relatively small role. 'Lamartine describes it as "the product of a moral idea, of a reason, logic and society"'1. At first people were fighting for the ideology, for the liberalism. The idea of equality was strong enough to lead to a revolution on a European scale. What is even more important, they almost achieved their aim. As far as I know, the springtime of peoples was to fail, because too many classes were involved. It is almost impossible to create such a system that would satisfy everybody. However there is an ideology that can unite nations to uprise, which undoubtedly happened in 1848. It is true that in the second and third part of revolutions, the ideology did not play as important role as in the first one, but one has to agree that, although indirectly, it still influenced the events that occurred in that period: a large amount of people were still fighting for liberal monarchy, some cared only about their own interests, which is partly a cause of the failure of 1848. therefore the the significant importance anr role of the ideology should not be declined. Furthermore, the events of Springtime of Peoples 1848 left also something else than only abbolision of feudalism, right to vote in France and constitution in several countries. The revolutions were reminding of heroes, legends, in peoples minds remained the pictures of barricades and fleeing monarchs, and, most importantly, the possibility to choose their representatives. ...read more.