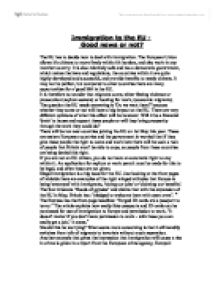 Immigration to the EU - Good news or not?

Immigration to the EU - Good news or not? The EU has to decide how to deal with immigration. The European Union allows it's citizens to move freely within it's borders, and also work in any member country. It is also relatively safe and has a democratic government, which makes the laws and regulations, the countries within it are quite highly developed and successful, and provide benefits to needy citizens. It may not be perfect, but compared to other countries there are many opportunities for a 'good life' in the EU. It is therefore no wonder that migrants come, either fleeing violence or prosecution (asylum seekers) or looking for work, (economic migrants). The question the EU needs answering is 'Do we want them?' because whether they come or not will have a big impact on the EU. There are very different opinions of what this effect will be however. Will it be a financial 'drain' to house and support these people or will they bring prosperity through the work they could do? There will be ten new countries joining the EU on 1st May this year. These are eastern European countries and the government is worried that if they give these people the right to come and work here there will ...read more.

Taking a look on a different point of the argument, it seems that there is more evidence that goes against the papers. What would happen to the EU if there was a shortage of workers? At a glance there seems to be too much unemployment for this to be possible, however economics researcher, Nigel Harris says: "Even when unemployment is high, there are areas of great shortages of workers. Anyone who has had the misfortune to work flipping hamburgers, as a dishwasher in a hotel, in gutting chickens in rural factories, knows the desperate scarcity of workers in jobs where the pay and conditions are rotten." ? A shortage of workers in the EU could be caused by a number of things, the main factor being that Europe has an aging population. Europeans are having smaller families, meaning less children to 'take the place' of adults when they retire. Improving health care and knowledge also contributes to people living longer in general. This is why, in December, the British Home Secretary, David Blunkett said Britain could withstand 200,000 migrants each year without problem. In fact, Europe needs the workers. The United Nations estimates that Spain needs 400,000 immigrants a year for the next 20 years to avoid a shortage of workers (a labour shortage) ...read more.

Also, when other poorer countries joined the EU, for example Greece and Portugal, there was no great immigration rise either, so why are we worried now? After looking at general information about migration, and evaluating both sides of the argument, for and against increasing migration to the EU, I have come to my own conclusion. It is easy to be taken in to the dramatic headlines and articles of the tabloids, whose messages often boil down to- 'migrants will mess up our perfect society', as they 'invade', 'swamp' and 'flood'. However, by taking a look at the newer, though less publicised story, I now believe that increased migration is an opportunity to advance the world. By means of businesses, improving unemployment and as a way to stop Europe's aging population becoming a problem. And also, to give workers an opportunity to send money home to their families in the third world. At last there would be a serious possibility of a real attack on world poverty, and this, to me at least, seems allot more dramatic than any tabloid headline. As says Nigel Harris, "The world belongs to us all." Rose Lancaster - Rous 10H ? www.thesun.co.uk ? See Express news article ? www.thegardian.co.uk ? www.dallasford.org/reasurchpapers ? www.redpepper.org.uk ? www.homeoffice.gov.uk ...read more.