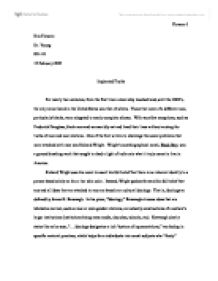 Eric Flowers Dr. Young EN 411 15 February 2005 Implanted Truths For nearly two centuries, from the first time a slave ship touched land, until the 1960's, the only voice heard in the United States was that of whites. Those that were of a different race, particularly blacks, were relegated to nearly complete silence. With very few exceptions, such as Frederick Douglass, black men and women idly sat and lived their lives without voicing the truths of race and race relations. One of the first writers to challenge the social problems that were attached with race was Richard Wright. Wright's autobiographical novel, Black Boy, was a ground breaking work that sought to shed a light of truth onto what it truly meant to live in America. Richard Wright uses his novel to assert his full belief that there is no inherent identity to a person based solely on his or her skin color. Instead, Wright pushes forward his full belief that any and all ideas that are attached to race are based on a cultural ideology. That is, ideology as defined by James H. Kavanagh. In his piece, "Ideology," Kavanagh stresses ideas that are labeled as normal, such as race or even gender relations, are actually constructions of a culture's larger institutions (institutions being mass media, churches, schools, etc). ...read more.

In my mind, he had to have been her father, or at least a close relative. Neither myself nor Richard Wright were able to see that what took place was all based on a societal construction concerning race. Both white men sought to "put a n****r in his/her place." Yet, because we were children, Wright and I both were not yet shackled with the "truths" of race built by American ideology. This then only furthers the point that one is not born knowing that he and the children of different races must be inherently different that him/her. However, ideology is hard to completely escape. Even in seeing at a very young age that there were no intrinsic racial differences, Richard Wright still went through a stage where he too grasped ideological racial differences. Before he is able to reject ideology and assert his own beliefs, Wright first lives what would be a "normal" life. That is, normal in the sense that he too clung to the beliefs concerning race that were given to him by everyone around him. Unlike a small child who sees all people as some what the same, Wright grows into a person that seems to know and even feel that the difference of races must be true from birth. ...read more.

Ideology is not something that is easily defined or grasped. It permeates every aspect of not only American life, but others cultures too have their own ideology. Race is just one small aspect of what is shaped by those that present mass information. This way of life will continue to exist until some kind of change is affected. Richard Wright proposed Communism. Here, however, is where I am different. I propose a mass attack on all information outlets. There are several people that idly stand by and live their lives even in knowing that they are barred down by social constructions. I ask that all people in this situation, all that know there is no inherent difference between any person based solely on race get their belief "out there." Stated better, do not idly sit by and complain or remain angry. Instead, I propose that we all write papers, give speeches, give interviews, do whatever is necessary in a non-violent way to grow from the minority to the majority. We must make sure that the young and old alike here our voice, and that they here our message. Only then can it be seen that it is ones environment that shapes their identity as opposed to some birth right. If we sit and wait or do nothing, we will continue to live in a world that we claim to despise. ...read more.