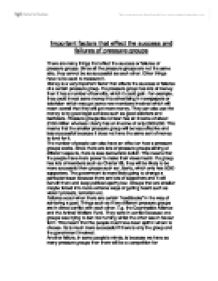 Important factors that effect the success and failures of pressure groups

If a group has lots of members such as Charter 88, they will be likely to be more successful than groups such as Liberty, which only has 5000 supporters. The government is more likely going to change a particular issue because there are lots of supporters and it will benefit them and keep political apathy low. Groups that are smaller maybe forced into more extreme ways of getting heard such as violent protests, terrorism etc. Failures occur when there are certain "roadblocks" in the way of achieving a goal. Things such as if two different pressure groups are in direct conflict with each other. ...read more.

The feeling of how important an issue is had a huge effect on the success of the group. If the group is campaigning for banning of genetically Modified foods, which nobody really cares about it is going to be less successful if a group was campaigning for the Misconduct of children. It will be more successful because it will most likely to be in the news which will mean independent, free coverage for the group. It will also bring in people. Overall the main points that effect the success or failure of a group is timing and members. If the timing is right then you could get lots of members. If there are lots of members then you will get more income to spend on the campaign. ...read more.