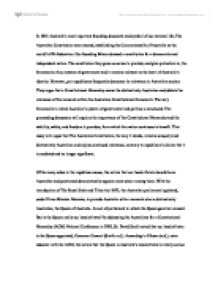 In 1901 Australia's most important founding document and symbol of our national life, The Australian Constitution was enacted, establishing the Commonwealth of Australia as the world's fifth federation.

In 1901 Australia's most important founding document and symbol of our national life, The Australian Constitution was enacted, establishing the Commonwealth of Australia as the world's fifth federation. Our founding fathers devised a constitution for a democratic and independent nation. The constitution they gave us serves to provide, and give protection to, the framework of our system of government and it remains relevant as the heart of Australia's identity. However, pro-republicans frequently denounce its relevance in Australian society. They argue that a Constitutional Monarchy cannot be distinctively Australian and debate the relevance of the monarch within the Australian Constitutional framework. The very framework in which Australia's system of government and politics is structured. The proceeding discussion will explore the importance of the Constitutional Monarchy and the stability, safety, and freedom it provides, from which this nation continues to benefit. This essay will argue that The Australian Constitution, the way it stands, remains uniquely and distinctively Australian and enjoys continued relevance, contrary to republican's claims that it is outdated and no longer significant. Of the many sides to the republican cause, the notion that our head of state should be an Australian and positioned democratically appears most senior among them. With the introduction of The Royal Style and Titles Act 1953, the Australian parliament legislated, under Prime Minister Menzies, to provide Australia with a monarch who is distinctively Australian, the Queen of Australia. An act of parliament to which the Queen gave her consent. ...read more.

Another aspect of the argument for a republic is that Australia, in order to become truly independent and reach maturity, must sever her political and legal apron strings from Britain and leave her colonial past behind to become a republic. Australia is already a proud, independent, and sovereign nation. The Constitution establishes Australia as a fully independent and self-governing nation with an independent and autonomous federal system of democratic government. Australia's independence was reaffirmed in parliament when Buckingham Palace, in response to Gough Whitlam telephoning to appeal his dismissal, informed Mr Speaker that the Australian Constitution placed all constitutional matters in the hands of 'our Head of State', the Governor General. I contend that Australia has already come of age and achieved complete independence, partly symbolised by the Queen's title being changed to Queen of Australia, and partly due to the evolving of our system of government for over 100 years since the Constitution came into force. The Australian Monarchy is exclusively Australian, it is unique, it is ours and ours alone, and continues to represent an extremely safe and stable democratic structure of government. With the passing and introduction of The Australia Act 1986, Australia officially ceased to be legally and politically dependant on Britain, becoming free and independent in every way (O'Keefe n.d.). That the Constitution was enacted by parliament at Westminster, should not detract from the fact that it was devised for and by Australians. ...read more.

Such benefits and stability could not be sustainable if the Constitution was no longer relevant. When the Constitution was devised and subsequently adopted, certain sections may well have been more relevant for the time period immediately after its enactment in 1901. This is understandable in the early days of shaping a federal government in accordance with the confines of a new Constitution. This does not mean, however, that because such sections are somewhat outdated, that they need to be deleted. In fact, it is all the more reason to leave it alone as a reminder of our colonial past. I have nothing against change, so long as it is of clear benefit. Although I have strong objections to any change that threatens to separate the Constitution from the monarchy, I do support further amendments to the Constitution that assists greater unification, and acknowledges the importance, of all Australian's. Our Constitution regulates Australia as a free, self-governing, and independent nation. Although neither the British government nor the British monarch has any power or control of Australia, the Constitutional Monarchy has always provided tremendous stability and support to this nation. Those who argue that Australia is not an independent nation in its own right must ignore history, law, and more importantly, the role that the Constitution has played in shaping and maintaining Australia as a great nation. It has been clearly demonstrated that The Australian Constitution and its relationship to the monarchy is and will remain distinctively Australian and relevant. Australians should understand it, be proud of it, and make every effort to maintain it. ...read more.